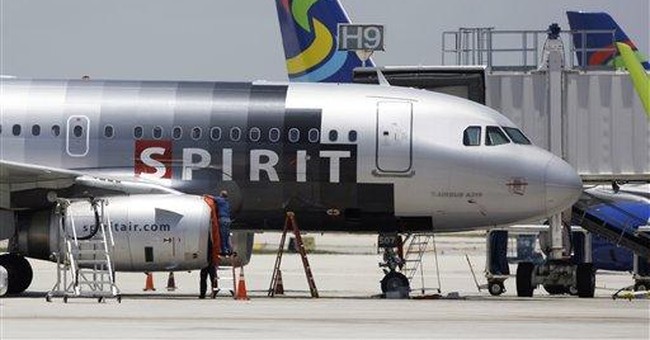 Spirit Airlines is again in the news for allegedly forcing a family to deplane because their young child was ‘non-compliant’ with federal mask mandates.

The incident, which was partially recorded and posted to Twitter, struck a chord with many as it depicts a father and a pregnant mother, both masked, being asked to leave the plane because their 2-year-old child, who is calmly eating throughout the exchange, does not have her mask on. The couple was also traveling with their 7-year-old special needs son.

The 2-minute video on Twitter has since gone viral with over 1.8 million views in under 20 hours.

WATCH THIS: A family was just kicked off a @SpiritAirlines flight from Orlando to NY, because their two-year-old child who was eating, wasn’t wearing a mask. The mother is 7 months pregnant, and they have a special needs child. The entire flight was deplaned. pic.twitter.com/dcjLIEbDfA

In a statement to the Washington Examiner, Spirit Airlines contradicted the established narrative sating that the young family was asked to leave because the parents refused to wear a mask, not the child.

"We’re aware of incorrect information circulating about Spirit Airlines Flight 138 from Orlando to Atlantic City,” the airline said in a statement. “The flight was delayed due to adults who did not comply with the federal mask requirement. We allowed the Guests to continue on the flight to their destination after assurances of compliance."

However, this claim seems questionable at best given the evidence from the assorted videos and the fact that the family supposedly at fault was allowed back onto the same flight after the deplaning caused a 2-hour delay.

More from the @SpiritAirlines flight. pic.twitter.com/PMq2nArVWz

Not to mention, the family’s father, Ari Eisenberg, told Fox New the airline’s statement was “such a lie,” going on to say "Everything was fine and all of the sudden someone comes over to us and asks us to deplane... I kept asking what didn’t we comply with," noting he received no coherent response.

In the video, a female flight attendant tells the family, “I told you, noncompliance — you'll have to get off. I didn't want to do this."

When the parents points to their respective masks and respond that they are in fact complying with the mandate, the flight attendant points to the baby on the wife’s lap and says, “she’s not wearing it.”

Throughout the video, other passengers can be seen and heard defending the family. At one point Eisenberg asks the man sitting across the aisle, “you’ve been sitting next to me, have I been a wearing a mask?”

To which the man responds, “he’s been wearing it the whole time.

Notably, the male flight attendant who is not seen on camera, but allegedly created the issue and made the initial request for the family to leave, was not allowed back onto the flight after the plane was re-boarded.

While Spirit claims the Male Attendant was relocated for reasons unrelated to the debacle, Fox News reports that he was “seen being escorted off the plane by Orlando police officers.”

Back in January, the Biden Administration issued a federal mask mandate requiring that all passengers over the age of two must wear a mask on planes, trains and buses. The Federal Aviation Administration has recently extended the order due to the level of disruptive behavior they’ve encountered during fights.

Ultimately, this is but the latest in a long string of infuriating masking incidents, and while Spirit Arlines will likely face no consequence, the same cannot be said for the families they have tormented.

The Eisenberg's explain, "My son missed his medication window. Thank God he didn’t have a seizure. He was sitting there in a soaking wet diaper because I couldn’t change him during the whole thing... My daughter is going crazy from all this it was a terrible terrible experience to go through let alone someone with a special needs child."