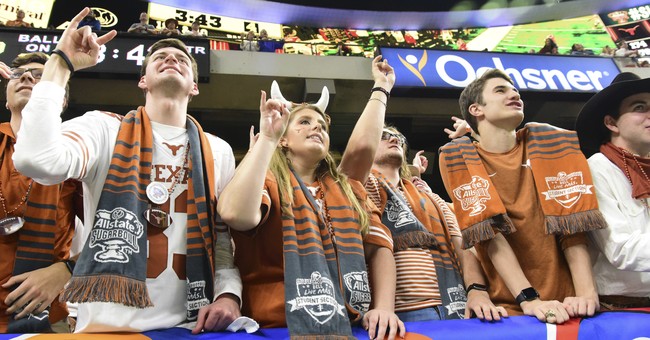 “The Eyes of Texas,” the University of Texas’ (UT) beloved alma matter, has been deemed free from “nostalgia for slavery” and “racist intent,” so says an internal committee instituted by the school.

The committee was created in October of 2020 after multiple student-athletes sent a letter to the university asking for a new fight song “without racist undertones.”

In response, and in a rare example of modern institutional backbone, UT decided the century-old song would remain in place and instituted a committee composed “of former students, current students, administrators, faculty members, student athletes, retired administrators, spirit squad members, and communication specialists” to thoroughly analyze the song’s origins and institutional impact at the university.

The committee announced its conclusion on Tuesday, expressing that while the song debuted “in a racist setting,” which was, “exceedingly common for the time… the preponderance of research showed, [“the Eyes of Texas”] had no racist intent.”

The alma matter, sung to the tune of “I’ve been working on the railroad,” was written in 1903 by UT’s own resident poet-laureate, John Lang Sinclair. The song was inspired by then school President William Prather’s often repeated refrain aimed to inspire decent action and personal reflection, “the Eyes of Texas are upon you.”

According to the report, the concerns over the fight song “included the fact that it was debuted in a minstrel show and therefore likely by student singers wearing “blackface”; the belief that the phrase “The eyes of Texas are upon you” was derived from Confederate Gen. Robert E. Lee, who was thought to have often said “the eyes of the South are upon you.””

However, the 59-page report went on to conclude “that there was a very low likelihood that the line originated with Robert E. Lee and [the alma matter] was instead a message of encouragement and accountability to the students and faculty at the then-fledgling university.”

As Sinclair, the tune's original composer, said himself, “It should be explained that in those days, before the University struck oil, and before the millennium had arrived when the legislature should be composed entirely of University graduates who would pass appropriation bills without a dissenting vote, the conduct of the student body had an immediate relation to the actual budget.”

This could easily have been just another example of “cancel culture” acting up and depriving the world of something meaningful, but instead, the school’s decision to stick up for its fight song, and institute of a review committee, offers an exceedingly rare example of institutional patience as opposed to the norm of immediately bending to the will of noisy students.

Ultimately, the song remains because its meaning to UT students, alumni, and staff has nothing to do with the embarrassing context it was first performed and everything to do with a unifying call to for self-improvement.

Ricky Williams, an alumni of UT and the 1998 college football NCAA Heisman trophy winner, had this to say in response to the calls to remove the alma matter: