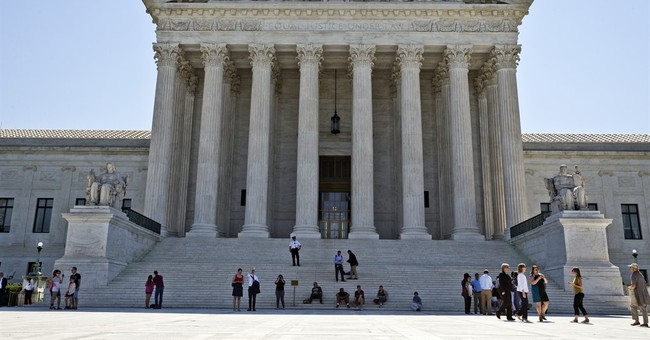 The Supreme Court, for the first time in months, delivered a ruling yesterday that seriously struck a blow to our fourth amendment rights. The 5-3 decision ruled that police can use evidence obtained during an illegal stop, if the police find out during the stop that the person has pending arrest warrants.

This decision is a huge reversal from the court's decision in Mapp v. Ohio, where they said that evidence obtained in a warrantless search cannot be used in court because it violates the fourth amendments protection against "unreasonable searches and seizures."

Let's look at some of the facts behind Utah v. Strieff, the case that led to this ruling. Edward Strieff had walked out of a house that an officer had been watching after he received an anonymous "narcotics activity" tip. The officer then asked Strieff what he was doing there and ran him through the police database. The officer arrested Strieff after finding a traffic warrant, and then found drugs when he searched him.

The state of Utah argued that although the police stop was illegal, the discovery of the warrant gave the officer a good enough reason to arrest Strieff and search him. Strieff's main argument was that the evidence shouldn't have been admitted because the officer didn't have a warrant, and that admitting them in court was a violation of his constitutional rights.

The majority opinion of the case was delivered by Justice Clarence Thomas who was joined by Chief Justice John Roberts, Justices Anthony Kennedy, Stephen Breyer and Samuel Alito.

"The warrant was valid, it predated Officer Fackrell's investigation, and it was entirely unconnected with the stop," wrote Justice Thomas. "And once Officer Fackrell discovered the warrant, he had an obligation to arrest Strieff."

It may seem like common sense to some to allow this, but this decision now means if you have a simple traffic violation, like Strieff did, that the police can use that to search you. Some cities have tons of pending warrants, due to faulty police practices in that city. The Justice Department's 2015 report found that 16,000 of Ferguson's 21,000 citizens had outstanding warrants.

Justices Sonia Sotomayor, Elena Kagan and Ruth Bader Ginsburg were the justices that dissented in this case. Sotomayor delivered, perhaps the most brutal of these dissenting opinions.

"This case allows the police to stop you on the street, demand your identification, and check it for outstanding traffic warrants—even if you are doing nothing wrong," wrote Sotomayor. "If the officer discovers a warrant for a fine you forgot to pay, courts will no excuse his illegal stop."

Sotomayor really seems to have been moved by all of the racial tension lately, and made quite a serious case further in her opinion to the kind of racism this decision could further.

"We must not pretend that the countless people who are routinely targeted by police are 'isolated,'" wrote Sotomayor. "They are the canaries in the coal mine whose deaths, civil and literal, warn us that no one can breathe in this atmosphere. They are the ones who recognize that unlawful police stops corrode all our civil liberties and threaten all our lives. Until their voices matter, too, our justice system will continue to be anything but."

The entire decision can be found here.