Obama to Hide Obamacare Rates Till After Election Day 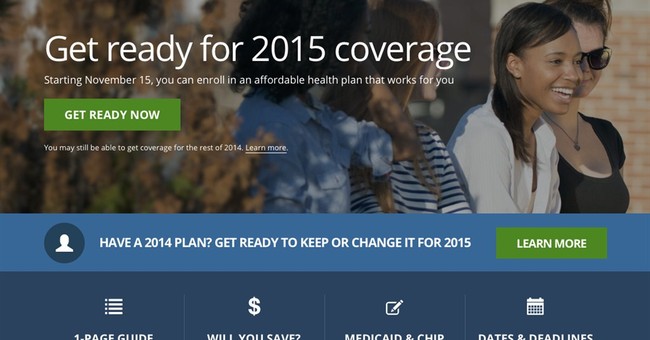 HealthCare.gov, the online portal where millions of Americans must buy health insurance, will not display premiums for 2015 until after the 2014 elections, the Associated Press reported Wednesday.

Obama administration officials told the AP that Americans will not be able to find out if their health insurance premiums are going up "until the second week of November," which conveniently falls after Americans will go to the polls November 4th.

"Insurers say one big challenge for next year will involve millions of returning customers," the AP reports. "It's not really a technology issue, but a time crunch that also coincides with the Thanksgiving and Christmas holidays."

"Existing customers who do nothing will be automatically re-enrolled in their current plan as of Jan. 1," the AP continues. "But they will receive this year's subsidy amount, which could be lower than what they'd be entitled to for 2015. And that could mean sticker shock over their new monthly premiums."

Virtually any change in income can significantly change what kind of premiums and plans are available to current Obamacare enrollees. Americans who thought they were lucky to get a raise this past year are likely to either lose their Obamacare subsidies entirely or see them significantly reduced. Americans who report less income compared to a year ago might not qualify for private health insurance at all and could be forced into Medicaid.

Income changes are not the only threat facing Obamacare enrollees. The rates for their specific plan may have increased dramatically from last year and reports indicate that the most popular low cost plans also experienced the steepest rate hikes.