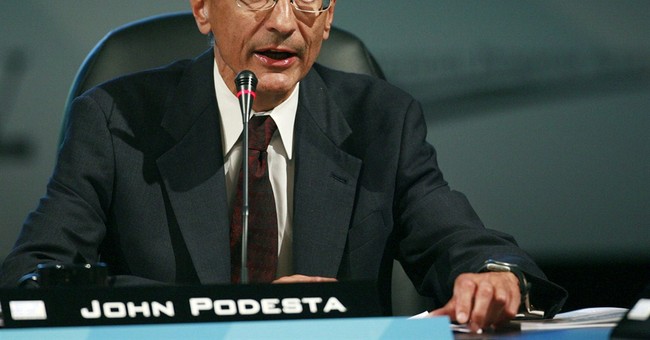 Yesterday, The New York Times reported that President Obama had hired former-President Clinton Chief of Staff John Podesta as "counselor" for a year.

This would actually be the second time Podesta served Obama, since Podesta led Obama's presidential transition team in 2008. Since then, Podesta has not only returned to the progressive think tank he founded, the Center for American Progress (CAP), but he has also created a brand new think tank, the Washington Center for Equitable Growth, to focus on just income inequality.

So just what will Podesta be doing for Obama this time around? The NYT reports:

Mr. Podesta will help [Obama’s chief of staff, Denis] McDonough on matters related to the health care law, administration organization and executive actions, said a person familiar with the plans, and will focus in particular on climate change issues, a personal priority of Mr. Podesta’s.

It is those "executive actions" that conservatives, and really anybody who claims to honor the United States Constitution, should worry about.

After Obama was soundly rejected by the American voters in 2010, Podesta penned a report for CAP titled, "The Power of the President," writing:

Concentrating on executive powers presents a real opportunity for the Obama administration to turn its focus away from a divided Congress and the unappetizing process of making legislative sausage. ... It would be a welcome relief from watching legislative maneuvering to see the work of a strong executive who is managing the business of the country through troubled times.

Since that report was published, Obama has completely ignored Congress on a wide variety of issues, from immigration to energy, instead asserting his own power as president to make law as he, and he alone, sees fit.

The move to hire Podesta now, as opposed to waiting till after the 2014 elections, is an admission by the White House that their second term legislative agenda (immigration reform, gun control, and climate change) is already dead.

If progressives are going to make any progress expanding government during the rest of Obama's presidency, it will only be through unilateral executive action. It will not be sanctioned by Congress.