Paul Ryan Assures Conservatives He is Not Backing Down on Obamacare 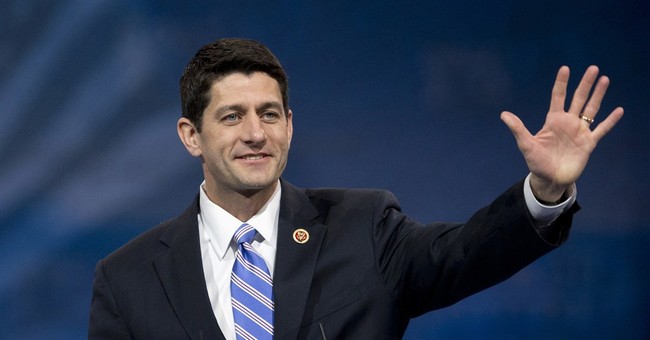 "We have an opportunity here to pay down the national debt and jump-start the economy," Ryan writes, "if we start talking, and talking specifics, now."

But while Ryan's op-ed does mention the need to cut spending, reform entitlements, and simplify the tax code, at no point does it mention Obamacare. Many conservatives took this to mean that Ryan and the rest of the House Leadership are preparing to abandon the effort to dismantle Obamacare during the current debt limit/continuing resolution debate.

Bennett: Are you putting Obamacare to the side?

Ryan: No. Obamacare is an entitlement just like any other entitlement. So as far as we are concerned is part of this conversation. Medicaid, Medicare, Obamacare. Those are the big drivers of our debt.

If you look at the op-ed I say we have to rethink all of our nation's health care laws. I don't know that within the next two weeks we have a viable strategy for actually repealing Obamacare, every piece of it. We've defunded it. We've passed a delay of its more pernicious effects. We are going to keep going after Obamacare.

I am totally committed to dismantling this law because we are learning that it is going to do so much damage to the country. Premiums are skyrocketing, people are loosing the coverage they had, businesses are knocking people down to less than 40 hours a week. It's just terrible.

Ryan later added, "But we also don't want to keep our eye off the economic ball which is, that the debt is getting out of control, the economy is limping along, and you need to do some pro-growth things like oil and gas exploration, tax reform, and debt reduction. Those things can't be forgotten. So, we're not saying, stop going after Obamacare, we're saying add these other things to this list."

Bennett then asked Ryan to explain how adding issues to the discussion could possibly help compromise.

Bennett: The President has seemed intransigent. Now you are raising the stakes. Why, in heaven's name, do you think he'd be less intransigent on this.

Ryan: He clearly wants to defend his health care law. We obviously don't like it. That's a pretty big impasse. But I do think he wants to see the economy grow. It is in his interest to see debt reduction. There are plenty of Democrats we talk to hear in the House and in the Senate that say let's get some debt reduction. Let's do tax reform. We don't have Democcrats up here saying, let's go after Obamacare. But we do have Democrats saying let's get some debt reduction, let's do entitlement reforms, let's do these things we know can grow the economy.

You can listen to the full interview here.