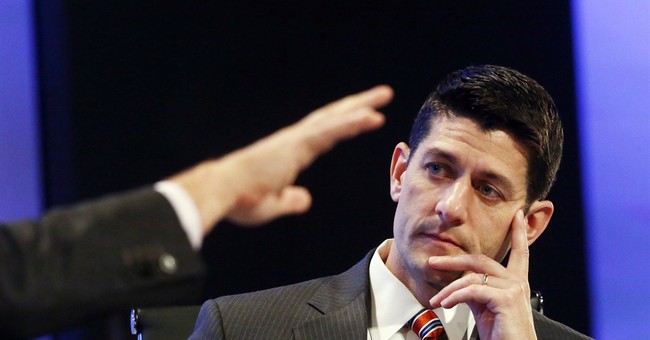 After talking to a source in Ryan-world, I can confirm that nothing could be further from the truth.

What is going on, is that House Republican Leadership allies, like Ryan, and Ways and Means Chairman Dave Camp, R-Mich., are meeting with multiple House members about the ongoing government shutdown and impending debt limit deadline.

But, this source stressed, these meetings are more like listening session than sales meetings. There is no leadership "Grand Bargain" plan that is being sold to members.

Instead, Ryan, Camp, and other Leadership allies, are feeling out their movement conservative colleagues about what the acceptable parameters of a final deal with Obama on the debt limit could look like.

Tax reform, in particular, is off the table already as nothing specific could possibly get down before the October 17 debt limit deadline, and anything else would be dismissed as worthless process promises.

There is interest in locking in sequester spending levels, but transitioning those savings from blunt across the board discretionary cuts, into entitlement savings.

That, coupled with some Obamacare scalp (medical device tax repeal, individual mandate delay) will be what the final offer to Obama looks like.