Eminem Says He Has 'Lines Ready' To Respond to Trump 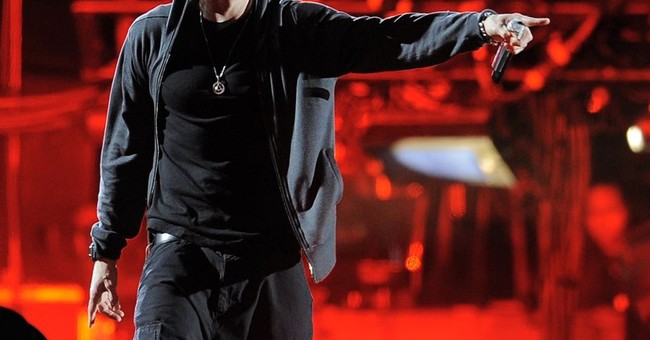 Back in October, rapper Eminem released "The Storm," which was four minutes of freestyle rap skewering President Donald Trump. Since then, he's put out an album, "Revival," which contains an overtly anti-Trump message throughout its tracklist.

Clearly, Eminem was hoping to trigger some sort of a response from the president (probably in the form of a tweet), but so far, no dice. Trump hasn't said a thing.

And this lack of a response isn't bothering Eminem at all--just kidding, Trump is basically living rent-free in his head. Speaking to Vulture, Eminem said that he has "lines ready" if Trump were to say something about him. Further, he said that he gets "flustered" thinking about Trump, and that he thinks the president has "people brainwashed."

"I'm not going to give any away now, but I've got lines ready if he says something about me," he said. "I get almost flustered thinking about him—that's how angry he makes me. The people that support him are the people he cares about the least and they don't even realize it. At what point do you—a working-class citizen, someone who’s trying to make s--t better for you and your family—think this guy who's never known struggle his entire f--king life, who avoided the military because of bone spurs, who says he's a billionaire, is really looking out for you? He's got people brainwashed."

Charming. Eminem hails from Michigan, which went to Trump by a very narrow margin in the 2016 election. While he could have learned a lesson from Katy Perry about not alienating a (likely) sizeable chunk of one's fanbase, it appears as though Eminem is not concerned about this. (Which, I guess is admirable in its own right.)

Still, it can't be healthy to be so fixated on a political figure. If I were Trump, I'd continue ignoring Eminem on purpose.