Huckabee Sanders Is Not Sure if Trump Believes in Aliens 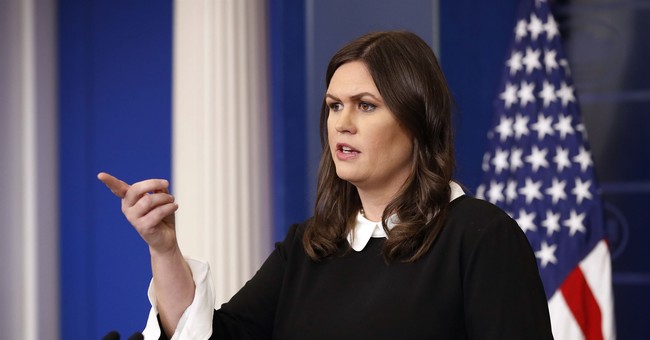 The Hill's Jordan Fabian asked Sanders about the president's belief in extraterrestrial life in light of the news that the Pentagon had a secret program to study UFOs and (allegedly) recovered materials from an unknown spacecraft. Funding for this program ran out in 2012, and Fabian inquired if Trump was himself a believer in aliens and questioned if he would be open to restoring funding to the program.

Sanders, who started laughing as the question was asked, said that she had not discussed the topic with the president, but she would "check in with that and be happy to circle back."

The Hill’s @Jordanfabian on whether Trump believes in UFOs pic.twitter.com/kDeqTvvTVf

If Trump were a believer in extraterrestrial life, he would not be the first president to do so. In 1973, future President Jimmy Carter (who was the governor of Georgia at the time) filed a report saying that he and his wife witnessed a UFO in 1969 in Leary, GA. That object has not yet been explained. During his campaign for president, Carter said that he would release "every piece of information" about UFO sightings to the public and to scientists. He later backed down from this, citing national security concerns. (Many "UFOs" were later disclosed to have been classified military projects.)

Former President Ronald Reagan also reported seeing a UFO. Reagan saw the unidentified object while on a small plane near Bakersfield, California in 1974.

The truth is out there...or is it?