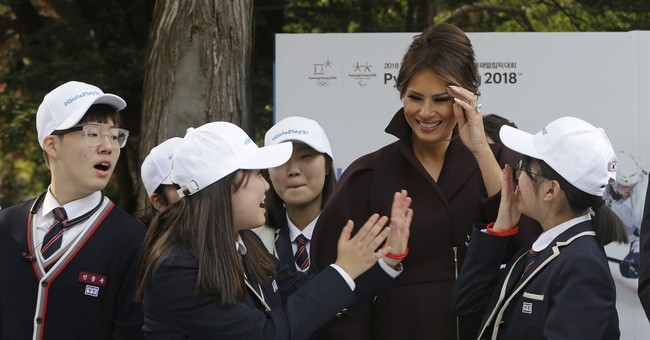 Melania Trump was in South Korea on Tuesday, where she appeared in Seoul with K-Pop singer Choi Min-ho of the group SHINee, who goes by the name "Minho." Mrs. Trump and Minho spoke at an event in Seoul to promote girls' participation in sports and the upcoming Wither Olympics in PyeongChang. It was a pretty standard First Lady type of appearance, until it came time to take pictures.

Mrs. Trump and Minho posed with a group of schoolgirls, and let's just say that one girl in particular was pretty pumped when she realized just exactly who she was taking a picture with.

Watch: (If this doesn't make you smile, nothing will.)

I CANT BREATHEE SHE THOUGHT HER FRIEND WAS GETTING ALL EXCITED OVER MELANIA BUT THEN SHE TURNED AROUND AND SAW MINHO pic.twitter.com/YJcvROu6M0

I CAN'T STOP LAUGHING AT THIS PICTURE HELP. THEY DON'T CARE ABOUT MELANIA AT ALL. MINHO IS SO POWERFUL pic.twitter.com/v9N7LVNAYq

Mrs. Trump appeared to take it all in stride, and visibly cracked up at the girl's starstuck reaction to Minho.

Honestly, can't really blame the girl for being more excited to see a pop idol. I'm fairly certain that most middle school students would be more excited to meet a pop star than meet the wife of the president of a foreign country. (I definitely would have!) Plus, it's not like they were being rude to Melania--they were just pretty hyped to meet Minho.

BuzzFeed dug up a few tweets about how people are now "shipping" the pair. (To "ship" someone means to put them in an imaginary relationship.)

i'm glad that even melania and especially the kids lmao fell in love with choi minho i mean who wouldn't??? obviously tho pic.twitter.com/GiKzM8BYLg