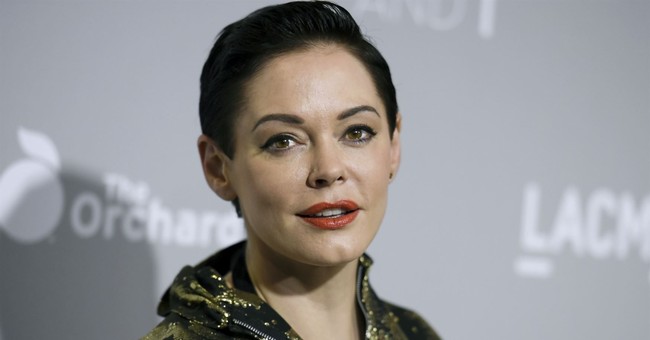 We have been in touch with Ms. McGowan's team. We want to explain that her account was temporarily locked because one of her Tweets included a private phone number, which violates our Terms of Service. 1/3

Twitter is proud to empower and support the voices on our platform, especially those that speak truth to power. We stand with the brave women and men who use Twitter to share their stories, and will work hard every day to improve our processes to protect those voices. 3/3

Twitter temporarily suspended actress Rose McGowan from the platform after her tweets regarding her experiences with sexual assault and sexual harassment in Hollywood went viral. McGowan posted a screenshot on Instagram of an email informing her that her account had been suspended for violating Twitter's rules. In the post's caption, she said there were "powerful forces at work" seemingly looking to prevent this information from getting out.

TWITTER HAS SUSPENDED ME. THERE ARE POWERFUL FORCES AT WORK. BE MY VOICE. #ROSEARMY #whywomendontreport

McGowan's account was still visible on Thursday morning, yet had no new tweets, meaning she likely was still suspended.

MTV's Real World alum Chet Cannon pointed out the hypocrisy of Twitter suspending a user for calling out people who have previously harassed them, but letting threats against President Trump slide.

Hi, @jack. So you suspend users for calling out a sexual predator, but not those who advocate the assassination of @POTUS? pic.twitter.com/QuM1FiNWJn

In 1997, McGowan settled with Hollywood Producer Harvey Weinstein after a "hotel room incident" during the Sundance Film Festival. Since the New York Times article alleging a wider pattern of sexual assault and abuse from Weinstein, McGowan has been outspoken in her support of his victims and in calling out people who she claims were aware of his behavior.

Bob Weinstein is a POS. They allllll knew. pic.twitter.com/zWJZf52ywq

!! FABRIZIO LOMBARDO. He was the Italian arm of the operation. BE SHAMED .@AsiaArgento ??? https://t.co/qJuZQ3Y3dI

TWC You don’t get to change your company name & be done with it. Every man there has the blood of sorrow on their hands. You are dirty.

Hey @mattdamon what’s it like to be a spineless profiteer who stays silent? pic.twitter.com/rp0OrRrpqJ

McGowan has dubbed her crusade the "#RoseArmy."

This is absurd. Twitter needs to get its act together. The same platform that refuses to suspend people who threaten death to people really has no leg to stand on in suspending people like McGowan.