Turkmenistan's President Gave Vladimir Putin a Puppy For His Birthday 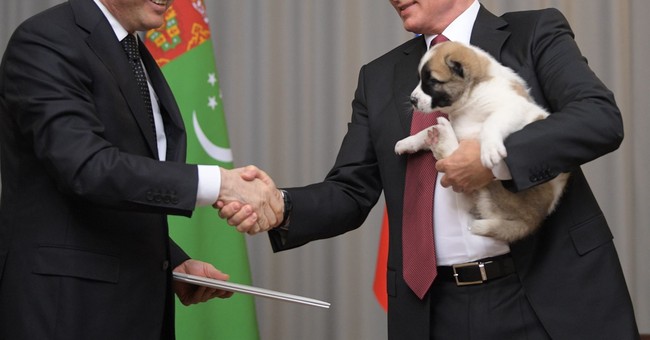 Russian President Vladimir Putin was gifted a puppy from Turkmeninstan's President Gurbanguly Berdimuhamedow for his birthday. The dog, an alabai (a type of Central Asian Shepherd dog) was named "Verny," which means "Faithful" in Russian. Putin's birthday was October 7.

And let's just say the delivery method was slightly odd. Berdimuhamedow picked up the dog by his scruff and presented him to Putin in a manner not dissimilar to Rafiki displaying newborn Simba to the animal kingdom at Pride Rock.

Putin then cuddled the puppy and kissed its head.

Putin got a puppy for his birthday and the handoff was totally normal pic.twitter.com/lwNPaIA38i

Putin has received dogs as gifts from many foreign leaders. He once accidentally (he claims) scared German Chancellor Angela Merkel with his black Labrardor retriever, Koni. Merkel does not like dogs.

Regardless of the awkward introduction, what a cute dog!