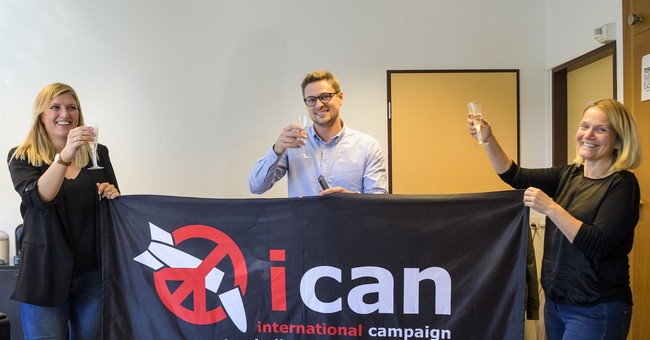 The Nobel Peace Prize has been awarded to the International Campaign to Abolish Nuclear Weapons (ICAN), an NGO that is based in Switzerland. The group was awarded the prize for their work on the Treaty on the Prohibition of Nuclear Weapons, which was backed by 122 countries in July. The treaty would ban nuclear weapons altogether. So far, 53 countries--none with nuclear capabilities--have signed.

It’s a great honour to have been awarded the Nobel Peace Prize in recognition of our role in achieving #nuclearban https://t.co/3raxze6iXi

ICAN called the prize a "great honour" and said that it was a tribute to the survivors of the bombings of Hiroshima and Nagasaki as well as those who have been impacted by nuclear tests. The group warned that this is a time of "great global tension" and that "fiery rhetoric" could lead to nuclear conflict.

This is a time of great global tension, when fiery rhetoric could all too easily lead us, inexorably, to unspeakable horror. The spectre of nuclear conflict looms large once more. If ever there were a moment for nations to declare their unequivocal opposition to nuclear weapons, that moment is now.

We applaud those nations that have already signed and ratified the Treaty on the Prohibition of Nuclear Weapons, and we urge all others to follow their lead. It offers a pathway forward at a time of alarming crisis. Disarmament is not a pipe dream, but an urgent humanitarian necessity.

We most humbly thank the Norwegian Nobel Committee. This award shines a needed light on the path the ban treaty provides towards a world free of nuclear weapons. Before it is too late, we must take that path.