James Clapper: It's 'Possible' Trump Was Recorded on Manafort Wiretap 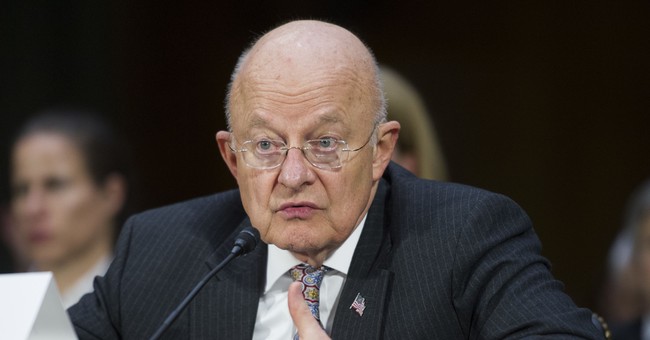 Former Director of National Intelligence James Clapper said on Wednesday night on CNN that it was "possible" and "conceivable" that President Donald Trump was recorded on a wiretap of Paul Manafort.

CNN host Don Lemon questioned Clapper about the wiretaps, who attempted to dodge the question by saying that he stood by what he said this past March and could not comment about a FISA warrant on Manafort. Eventually, Clapper admitted that it was indeed a possibility that Trump had been picked up on a wiretap of Manafort, saying it was "certainly conceivable" and "possible."

"Its possible" President Trump's voice was picked up in a wiretap of Paul Manafort, says former spy chief Clapper https://t.co/2ELM48axAa

On Monday night, CNN revealed in an exclusive story that Manafort, President Trump's former campaign chairman, had been the subject of several wiretaps both before and after the 2016 election. Manafort was under investigation for potential ties to Russia, but no conclusive evidence has been found.

Manafort has a residence in Trump Tower. This past March, Trump claimed that Trump Tower had been wiretapped, which was met with much derision at the time.

While Trump Tower has not been confirmed to have been wiretapped, this new information (and the fact that Manafort lived there) adds a bit of a wrinkle to the narrative parroted by former Obama officials.