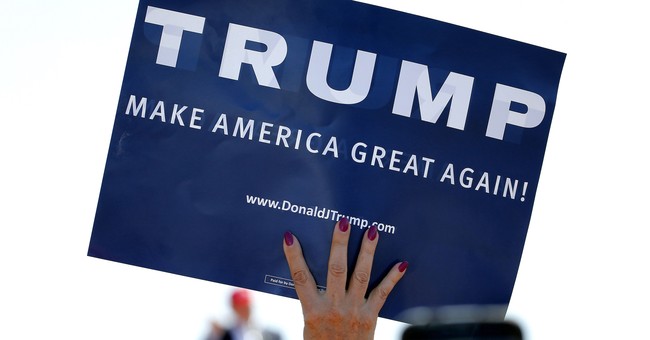 A Georgia math teacher has been removed from the classroom after a video emerged of her referring to President Donald Trump's campaign slogan as a swastika and instructed students wearing "Make America Great Again" shirts to turn their clothes inside out for the duration of her class.

According to the Atlanta-Journal Constitution, teacher Lyn Orletsky is no longer in the classroom at River Ridge High School. The district would not comment if she was fired or merely suspended. They also clarified that "Make America Great Again" apparel is not a violation of the school's dress code.

Herring told parents the school assigned a substitute teacher and would continue to search for a new, permanent math teacher.

The school system would not say if Orletsky was fired.

“We can’t discuss ongoing administrative investigations or disciplinary action,” a statement said. “When a teacher resigns or is recommended by the Superintendent for termination, it is added to a School Board meeting agenda, which is a public record. The agenda can be amended at any time.”

While I think firing would be slightly extreme, this is not acceptable behavior for a teacher. "Make America Great Again" is not like a swastika, and this is an insult to everyone who everyone who suffered under actual Nazis. I'm sorry that some opponents of Donald Trump haven't gotten over the election result yet, but he's still the president for the time being. It's unacceptable to compare the campaign slogan of a mainstream political candidate with the paraphernalia used by hate groups.