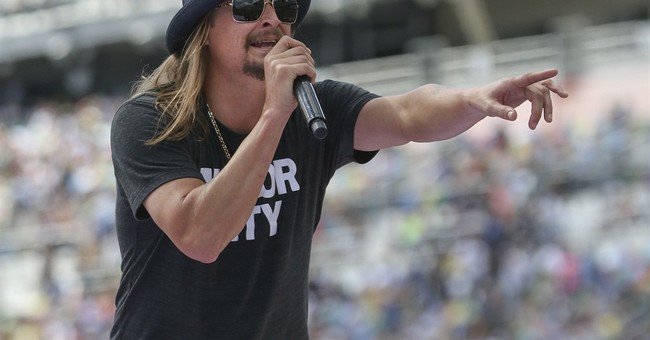 UPDATE: Kid Rock has responded to the allegations in true Kid Rock fashion:

The group Common Cause has filed a complaint against singer and potential Michigan Senate candidate Kid Rock (née Robert Ritchie) saying that he has violated federal election law. Kid Rock has been teasing a Senate run to challenge incumbent Sen. Debbie Stabenow (D-MI) for quite some time now, but has not officially declared candidacy or filed any forms. He's also selling "Kid Rock for Senate" items. This, according to Common Cause, is illegal.

From the complaint, which asks the FEC and the DOJ to investigate Kid Rock:

“Regardless of whether Kid Rock says he’s only  exploring candidacy, he’s selling ‘Kid Rock for Senate’ merchandise and  is a candidate under the law. This is campaign finance law 101,” said  Paul S. Ryan, Common Cause’s vice president for policy and litigation.  “Given the activities we’ve documented in the complaint, he can’t  reasonably claim to be merely testing the waters of candidacy and thus  exempt from candidate filing requirements. He is a candidate and is  obligated to abide by all the rules and make the same disclosures  required of everyone else running for federal office.”

Common Cause is asking the FEC and DOJ to launch  investigations of Kid Rock’s campaign and to “impose appropriate  sanctions for any and all violations” along with “additional remedies as  are necessary and appropriate to ensure compliance” with the Federal  Election Campaign Act (FECA).