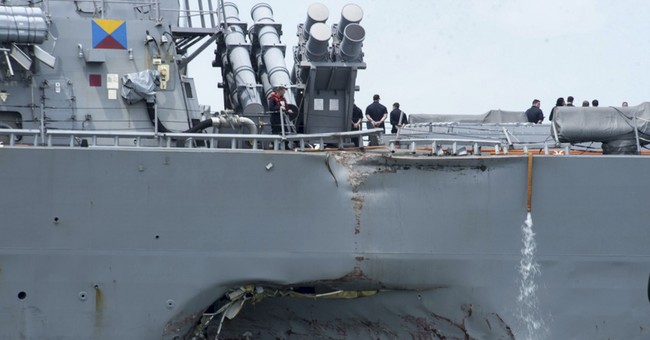 Some sad news to report: The Navy has suspended its search for the missing sailors who were on the USS John S. McCain when it was involved in a collision with a merchant ship. One victim of the collision has been identified, but the sailor's identity has not been released. An additional four bodies have been discovered in flooded compartments of the ship.

BREAKING: US Navy says it has suspended ocean search for sailors missing in collision of destroyer; one victim identified.

The USS John S. McCain was struck on August 21, 2017, by the Liberian-flagged merchant ship Alnic MC. The collision occurred off the coast of Singapore and Malaysia. After the incident, the ship was able to sail to a naval base in Singapore without assistance. She sustained heavy damage to her port side.

A body discovered by the Malaysian Navy that was thought to be one of the missing people from the USS John S. McCain was ruled out as being one of the ship's sailors.

BREAKING: US Navy's 7th Fleet says body recovered by Malaysian navy is not that of USS
John S. McCain's sailor.

This collision marked the second time this summer that a Naval destroyer was struck by another ship (after the USS Fitzgerald was hit in June, with seven deaths), and this marked the fourth collision total over the course of the last year. Both the McCain and Fitzgerald are Arleigh Burke-class destroyers.  Given these disturbing figures, the Navy relieved Vice Admiral Joseph Aucoin, who was in charge of the Navy's 7th Fleet, from his position. Aucoin was due to retire in the coming weeks.