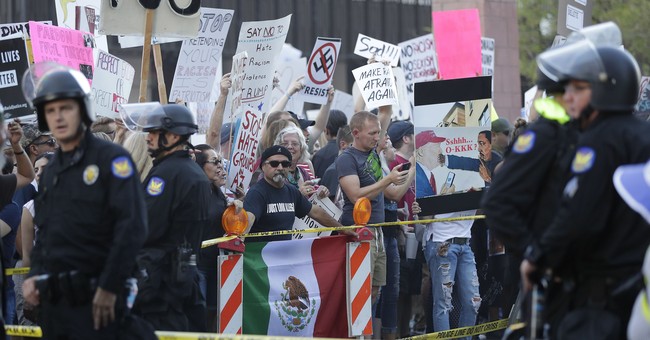 Police in Phoneix say they were pelted with bottles and rocks thrown by anti-Trump protestors following Tuesday night's rally. The police then deployed tear gas to disperse the crowd. According to Arizona's 12News, the police also used flash bangs and pepper balls in an effort to break up the crowd. The tear gassing began less than 10 minutes after Trump finished his speech.

Protestors were present before and during the rally as well.

Yahoo's Hunter Walker managed to get a video of the police gassing the crowd. According to Walker, the protestors were screaming "This is not a riot!"

Police are gassing the crowd and running in. People are screaming "This is not a riot!" pic.twitter.com/1vgZVwBmbF

A photo taken by CNN shows the street post-tear gas.

Other images and videos taken outside the rally appear to show a small riot as well as the police deploying tear gas.

It is currently unclear as to what specific incident prompted the use of tear gas by police.