Well, These Scaramucci Comments Are Certainly Something 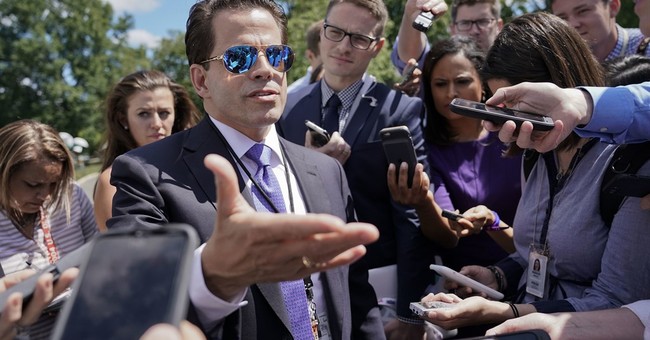 UPDATE: On Twitter, Scaramucci said that he sometimes uses "colorful language" and that he will refrain from doing so in the arena. He will continue to fight for Trump's agenda.

In an interview published in The New Yorker, newly-appointed White House Communications Director Anthony Scaramucci had some rather...interesting...comments about his colleagues at the White House. Scaramucci called Ryan Lizza on Wednesday asking for information about a source, and the conversation that follows was published Thursday afternoon. Per Lizza, at no point did Scaramucci say that the conversation was off the record.

I'll just let his words speak for themselves. (Language warning.)

On the White House's communications staff: Scaramucci threatened to fire them all unless Lizza revealed who his source was.

“Who leaked that to you?” he asked. I said I couldn’t give him that information. He responded by threatening to fire the entire White House communications staff. “What I’m going to do is, I will eliminate everyone in the comms team and we’ll start over,” he said. I laughed, not sure if he really believed that such a threat would convince a journalist to reveal a source.

On Reince Priebus, President Trump's chief of staff: Scaramucci thinks that Priebus is a "f-cking paranoid schizophrenic, a paranoiac."

The issue, he said, was that he believed Priebus had been worried about the dinner because he hadn’t been invited. “Reince is a f-cking paranoid schizophrenic, a paranoiac,”Scaramucci said.

During his conversation with Lizza, Scaramucci made it clear that he believes Priebus was the one who leaked information about him. He has since walked back this claim.

On Steve Bannon, White House Chief Strategist: Scaramucci believes Bannon is trying to "suck [his] own c-ck" rather than serve the United States.

Scaramucci also told me that, unlike other senior officials, he had no interest in media attention. “I’m  not Steve Bannon, I’m not trying to suck my own c-ck,” he said, speaking of Trump’s chief strategist. “I’m not trying to build my own brand off the fucking strength of the President. I’m here to serve the country.”

On leakers: Scaramucci thinks that they should be "f-cking kill[ed]" to help Trump get through is agenda.

“What I want to do is I want to f-cking kill all the leakers and I want to get the President’s agenda on track so we can succeed for the American people,” he told me.

On himself and his personality: Scaramucci describes himself as a "straight shooter."

“When I put out a tweet, and I put Reince’s name in the tweet,” he said, “they’re all making the assumption that it’s him because journalists know who the leakers are. So, if Reince wants to explain that he’s not a leaker, let him do that.”

Scaramucci then made a plea to viewers. “Let me tell you something about myself,” he said. “I am a straight shooter.”

Well, golly. To say this is "unhinged" would be putting things quite gently, and to call this interview an utter disaster seems to also understate the situation. Trump cannot possibly keep someone like this on his staff--this is utter insanity. Someone this high up in the White House--especially someone in a communications role!--should have the common sense to not spout off to a reporter on the record. This is disturbing.