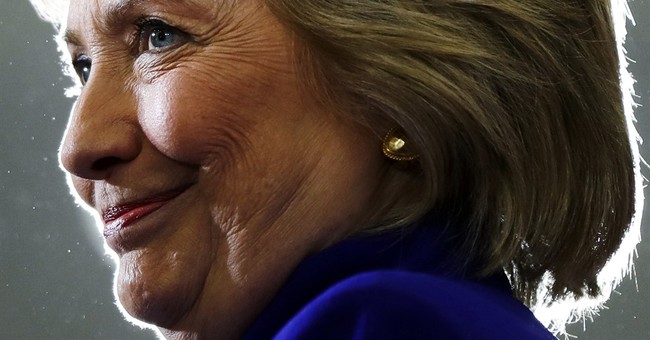 Hillary Clinton is set to release a tell-all memoir about the 2016 election, and the title has a few people scratching their heads and/or laughing. Titled "What Happened," it will be an inside look at the 2016 election from Clinton's point of view. Clinton described the book as "the most personal" that she's written, and said that it will give readers perspective on what it's like to run for president as a woman. She said that she "let her guard down" when writing this book.

Exclusive: Hillary Clinton is releasing a tell-all book about the election called 'What Happened' pic.twitter.com/9GMNBV3L6Y

So this is...something. It should be noted that the book's title is stylized as "What Happened," and not as "What Happened?" or "What Happened?!," both of which would be equally appropriate titles for a book covering her utter disaster of a campaign. Clinton's collapse in the lead-up to Election Day is the stuff of legends, and probably will be studied for the next hundreds of years to pinpoint where exactly she went wrong. While Clinton hinted that she's going to focus on the Russian "hacking" throughout the book, it'll be interesting to see if she owns up to how she completely neglected the midwestern part of the country.

But meanwhile on Twitter, people had quite a bit of fun mocking the book title:

WHAT HAPPENED by Hillary Clinton... pic.twitter.com/3SZin7fiPe

Hillary's new book #WhatHappened is going to detail how she spent over $1 billion, still lost the election and how it's not her fault.

#CrookedHillary getting MERCILESS ROASTED on her new BOOK????What Happened she asked? You're a lying,hateful, corrupt anti American criminal! pic.twitter.com/I2ZThU8crg

"What Happened" will be released on September 12.

Trending Townhall Video
Share this on Facebook
Tweet
The Number of Hurricane Ian Rescues That Have Been Conducted in FL So Far
Julio Rosas
Jake Tapper Owns DCCC For Trying to Hide How They Promoted Republican House Candidate
Rebecca Downs
Did a Political Dispute Cause a North Dakota Man to Kill a Teen? Either Way, He's Now Charged With Murder.
Matt Vespa
Latest FiveThirtyEight Issues Survey Seeks to Tie 'Partisan' Issues Together to See If There's Common Ground