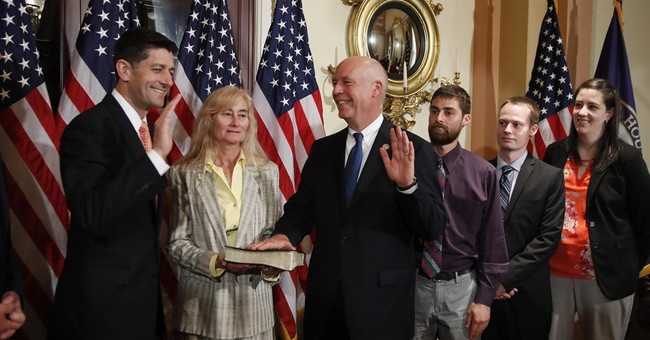 On Wednesday, Rep. Greg Gianforte (R-MT) was sworn in to Congress as the newest official congressman. Gianforte was elected in a special election to fill the seat vacated by Ryan Zinke, who President Trump picked as his new Secretary of the Interior.

Congratulations to the newest Congressman from #MTAL, Greg Gianforte! pic.twitter.com/CqfkazoSTr

Montana Democrats had a rather unusual present for newly-sworn in Rep. Greg Gianforte (R-MT): An orange jumpsuit.

The Montana Democratic Party mailed an orange jumpsuit to Greg Gianforte on his first day in Congress.

On the eve of the Montana special election, Gianforte "body-slammed" Ben Jacobs, a reporter for The Guardian. Gianforte eventually plead guilty to misdemeanor assault, and was sentenced to a fine, counseling, and community service. Despite this, Gianforte still easily won the election.

Gianforte also made a donation to the Committee to Protect Journalists and apologized to Jacobs.

While his conduct the night before the election was absolutely bizarre and completely unacceptable, he's paid his debt to society and been punished for his misdeed. Let's all move on.