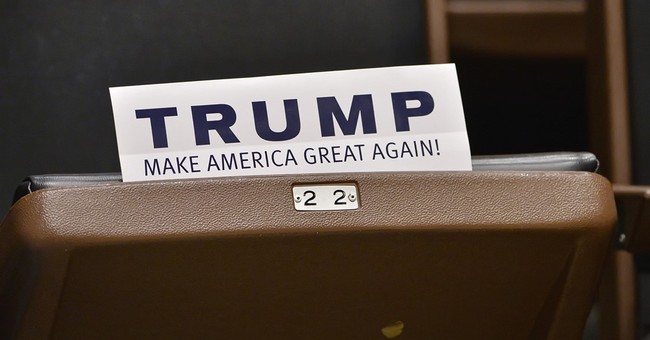 A school in New Jersey is under fire after students found that their pro-Trump shirts were digitally edited out of the school's yearbook. Two students at Wall Township High School in Wall, New Jersey, found that their Trump campaign shirts had been digitally edited to be plain black shirts in their yearbook pictures, and the freshman class president's submission of a Donald Trump quote under her picture had been removed. According to the Wall Schools Superintendent Cheryl Dyer, the clothing items were not in violation of the dress code, and it's a mystery as to why they were edited out of the yearbook as she did not condone the removal.

Trump wasn't struck from the entire yearbook, however--there was a reference to his election in another section.

The parents of the students say that they wish for the yearbooks to be reprinted with the correct, un-edited photos, and are calling the edits "censorship" and a violation of First Amendment rights.

Berardo's father wants the books reprinted at the district's expense.
"It's a teaching moment. It's a teaching moment for all the kids to understand that someone made a bad decision. That decision has consequences and therefore we're reissuing this because it was a violation of somebody's First Amendment rights and there was censorship. That's it," Berardo said.

Agreed. The shirts may have been an unorthodox choice for a school photo, but they weren't in violation of the dress code. They shouldn't have been edited, period. Trump is still the president, whether people like it or not. There's nothing inherently wrong with wearing campaign paraphernalia from a mainstream party's political candidate who was eventually elected president. It was wrong, and it shouldn't have happened. The shirts were not offensive, and it's pointless to edit them.