Jimmy Carter Reveals Who He Voted For In The Primary 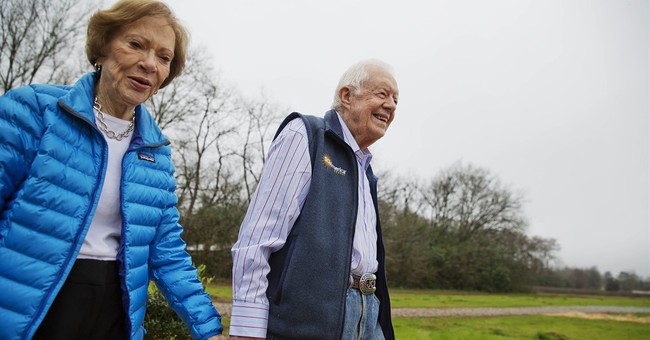 Former President Jimmy Carter has revealed who he voted for in the 2016 Democratic primary: Sen. Bernie Sanders (I-VT). He announced this on Monday at a Carter Center event, and threw a decent amount of shade on eventual Democratic Party nominee Hillary Clinton in the process.

From The Hill (emphasis added):

During an event Monday at a Carter Center discussion about politics and human rights, Sanders talked about the importance of getting more people involved in the voting process.

“If we had 80 percent of the people voting in this country, the Republican Party would be a significant minority,” Sanders said.

“So we have got to get people involved. And you do that by being honest about the real problems they face and come up with real solutions.”

After he finished, Carter said, "Can y'all see why I voted for him?"

Carter has been critical of Hillary Clinton in the past, but he did confirm that he voted for her in the general election.

This is certainly another display of the growing schism of the Democratic Party. When a former president is basically saying that the nominee of his party isn't being honest about problems or is unable to appeal to everyday Americans, that's a problem. At least he's not making excuses for Hillary based off of her gender or emails. There were real problems with her candidacy, and it's high time someone of his stature outlined them.