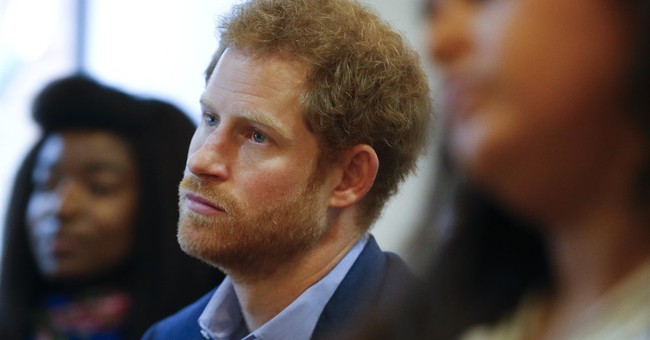 Prince Harry is garnering praise for a revealing interview with The Telegraph where he described his mental health struggles following the death of his mother, Princess Diana, in 1997. Harry said that while he bottled his emotions for the better part of two decades, and that he finally sought counseling after nearly suffering a nervous breakdown.

Harry said that a period of "two years of total chaos" finally inspired him to get help. He said that he was doing this interview in order to make a different for others, and to show a good example for younger members of the Royal family.

Prince Harry said of his loss: “My way of dealing with it was sticking my head in the sand, refusing to ever think about my mum, because why would that help?

“[I thought] it’s only going to make you sad, it’s not going to bring her back.

“So from an emotional side, I was like ‘right, don’t ever let your emotions be part of anything’.

“And then [I] started to have a few conversations and actually all of a sudden, all of this grief that I have never processed started to come to the ?forefront and I was like, there is actually a lot of stuff here that I need to deal with.”

He said he now counts himself very lucky that it was “only two years … of total chaos” before he learnt how to talk about it. “I just couldn’t put my finger on it,” he said. “I just didn’t know what was wrong with me.”

Harry is being praised for his frank honesty on a topic that many people shy away from.

Prince Harry says he has sought therapy. An extraordinary admission for a British Royal. This will help people https://t.co/mRU4qNT2nB

Good on Prince Harry for this, loss like this is huge and people have a hard time talking about it https://t.co/R8e4EbIbgI

So impressed by this from Prince Harry. Things like this go a long way in helping people's (esp men's) mental health https://t.co/eFicTYV0kw

How brave of Prince Harry to reveal his struggles with his mental health. Wealth and fame mean nothing. Mental illness doesn't discriminate.

As @bryony_gordon puts it 'Prince Harry just redefined strength and dignity for a new generation.' https://t.co/uOXUpbdreo

Townhall.com Staff
'Wrong Track:' Who's Up for Some More Brutal Polling for Biden and the Democrats?
Guy Benson
CARTOONS | Gary Varvel
View Cartoon
Most Popular

CDC Finally Admits What We Already Knew About Natural Immunity
Townhall
'Imagine being this broken': The ladies of The View are determined to prove Bill Maher and Bari Weiss right by bitterly clinging to COVID [video]
Twitchy
Ninth Circuit Trump Appointed Judge Lampoons His Entire Circuit Over Its Treatment of the Second Amendment
Redstate
Florida Is so Red, Democrats Can't Even Field Candidates in Some 2022 Races
PJ Media