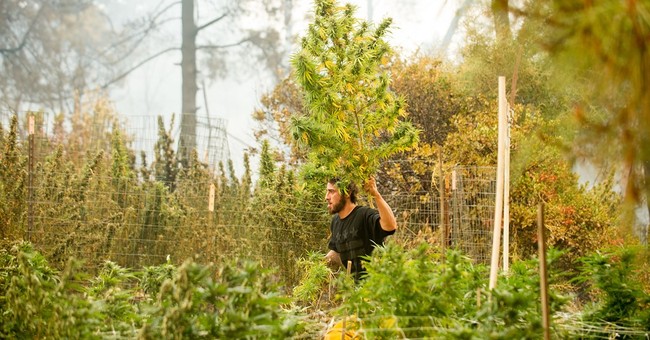 In what can only described as an absolutely absurd use of tax dollars, the Massachusetts National Guard and State Police used a helicopter to seize a single marijuana plant from an 81-year-old woman who was using the drug to treat her glaucoma and arthritis. Margaret Holcomb, of South Amherst, was growing the plant in her backyard fenced away from her neighbors.

Although medical marijuana is legal in Massachusetts for these conditions, Holcomb is not a medical card holder. She said she was concerned about finding a doctor to sign off for one as well as the cost of marijuana that is sold through license dispensaries.

Margaret Holcomb said she was growing the plant as medicine, a way to ease arthritis and glaucoma and help her sleep at night. Tucked away in a raspberry patch and separated by a fence from any neighbors, the plant was nearly ready for harvest when a military-style helicopter and police descended on Sept. 21.

In a joint raid, the Massachusetts National Guard and State Police entered her yard and cut down the solitary plant in what her son, Tim Holcomb, said was a “pretty shocking” action — one that he argues constitutes unlawful surveillance and illegal search and seizure.

Holcomb said he was at his mother’s home eating a late lunch with his sister when they heard whirring blades and looked up to see a military-style helicopter circling the property, with two men crouching in an open door and holding a device that he suspects was a thermal imager to detect marijuana plants.

Authorities also seized the plants grown by people who had legal medical marijuana cards, saying that they were visible from the street.

This is absolutely insane. The presence of a single plant that is used primarily for medicinal purposes is the definition of a victimless crime. Margaret Holcomb is hardly a drug kingpin, and it's definitely not necessary to send in a helicopter to take a plant. This is such a complete waste--especially since it's looking more and more likely that Massachusetts is going to legalize marijuana altogether in just over a month.