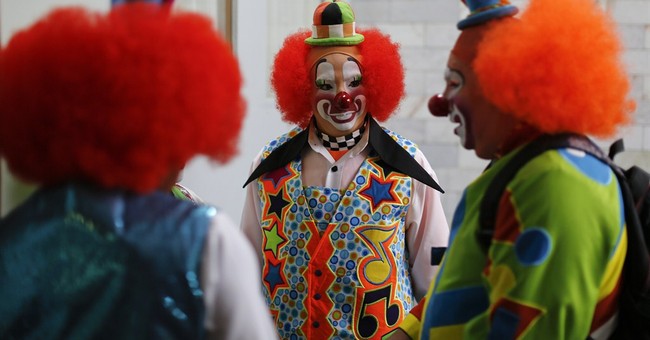 Just when it seemed 2016 couldn't get any weirder, suddenly there came a rash of creepy clown sightings. One Maine woman, however, discovered that the best repellant for a creepy clown was to pull out a concealed handgun. With the tables suddenly turned, the clown skedaddled out of there.

The woman, who lives in Auburn, ME and did not want to be identified, said that she was relaxing on her porch when an SUV pulled up by her house. In the back seat sat a man in clown makeup, who "formed a gun shape" with his fingers and said "bang." In response, the woman revealed that she was armed with a gun of the non-finger variety, and that was enough to scare the clown away. She then reported the incident to the police, saying the whole thing "freaked [her] out."

From the Lewiston-Auburn Sun Journal:

"He had a red Afro wig on and a red nose," she said. "The smile was creepy — the painted-on one." He was wearing a "clown-looking shirt/costume," and his neck was white.

"I say, 'I'm not afraid of clowns,'" the woman said. "I started laughing. It's almost Halloween, so I didn't think too much about it."

Then the clown formed a gun shape with his fingers, the woman said, and mouthed the word 'bang.'

Maine recently became a "constitutional carry" state, meaning that a person does not need a permit to openly or concealed carry a firearm.

Moral of the story: don't be a creepy clown and make weird threats at people. There might be some unintended consequences.