Priest Murdered By ISIS May Be Declared A Saint 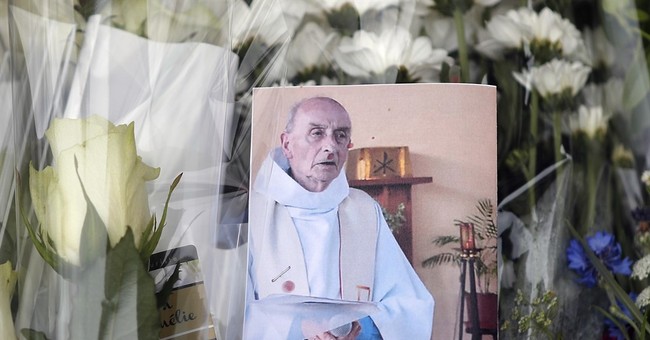 On July 26, Fr. Jacques Hamel was murdered while celebrating Mass in Normandy, France. He has now been declared a martyr by Pope Francis. The two men who murdered Hamel had pledged allegiance to ISIS.

Speaking on Wednesday at a requiem Mass for Fr. Hamel, Pope Francis said that Fr. Hamel had joined the "chain of martyrs" and had accepted his martyrdom. He then referred to Fr. Hamel as "blessed," which is a title reserved for those who have beatified. Beatification is the step below sainthood.

In his homily, the pope reflected on the mystery of Christ "who made himself a martyr for the salvation of men and women."

"The history of Christian martyrdom," he said, has continued from the first centuries until today, when "Christians are murdered, tortured, imprisoned and beheaded because they do not deny Jesus Christ."

"In this history, we arrive to our Father Jacques. He is a part of this chain of martyrs. The Christians, who suffer today -- be it in prison, in death or by torture -- for not denying Jesus Christ, show the very cruelty of this persecution. And this cruelty that asks for apostasy, we can say, is Satanic," the pope said.

Nonetheless, the pope noted, Father Hamel accepted his martyrdom and in his final moments, "did not lose the lucidity to accuse and clearly say the name of his murderer. He clearly said, 'Be gone, Satan.'"

"This example of courage, as well as the martyrdom of his own life when he gave himself to help others, to help create brotherhood, helps us to go forward without fear," the pope said.

The canonization process normally requires two miracles to be attributed to a person, but it's a bit different for people who are declared martyrs. In this case, the miracle requirement can be waived as the act of martyrdom is considered to be a "miracle of grace."

It should be noted that in cases of martyrdom the miracle required for beatification can be waived - martyrdom being understood as a miracle of grace. In this case, the vote of the Congregation would establish the death of the Servant of God as true martyrdom, resulting in a Decree of Martyrdom by the Holy Father.

The calls for Fr. Hamel to be declared a saint began shortly after the news broke of his murder, and it looks as though he's well on his way.