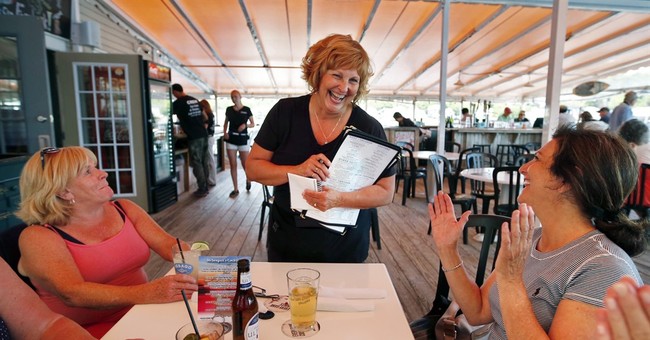 Maine's First Lady Ann LePage may be the anti-Hillary Clinton--and not just in terms of political beliefs.

Clinton, former first lady-turned-presumptive-Democratic nominee, has long been accused of being completely out of touch with the average American person: after all, she wears $12,000 jackets and hasn't driven a car in two decades. Compare this to LePage, wife of Maine Gov. Paul LePage (R), who has taken up a summer job as a waitress at a restaurant in Boothbay Harbor to bring in some extra spending money. While Mrs. LePage tried to keep her new job on the down low, her husband informed an audience at a town hall event this past week that his wife had taken on a new gig.

Gov. LePage is the lowest-paid governor in the nation.

Mrs. LePage said that she's saving up to buy a Toyota Rav4. She's working three days a week at McSeagull's, where her daughter worked last summer.

The wife of Maine Republican Gov. Paul LePage had kept a low profile for the first few weeks of her summer job. But then her husband told a crowd at a recent town hall that his wife took a job to "supplement" his $70,000 salary, the lowest of any U.S. governor.

Ann LePage said being a waitress is "something I've always, always wanted to do."

Her daughter Lauren made $28 an hour last summer at McSeagull's. LePage said she spent years taking care of her mother, who long suffered from scleroderma and passed away in October.

Now it's time to follow through on her interest, LePage said, adding: "I know she'd be proud of me."

Pretty incredible. While Gov. LePage's background as a businessman likely means that the LePages aren't exactly destitute, it's nice to see that they're still down-to-earth people who aren't above working in the service industry. Living in the Blaine House certainly hasn't changed Mrs. LePage all that much. There's no shame in work--regardless of how prestigious the job is.