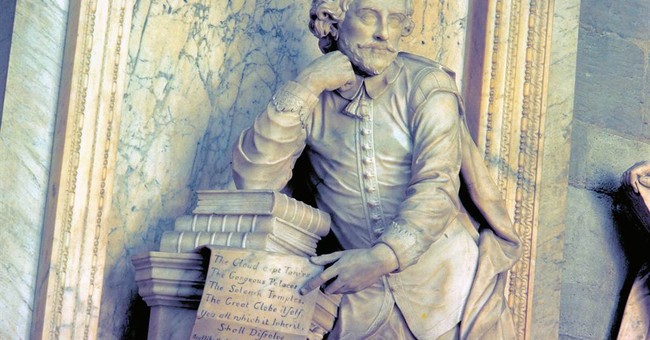 Yale University English majors have launched a petition urging the faculty to "abolish" the introductory course sequence referred to as "Major English Poets"--a yearlong study of Shakespeare, Chaucer, Milton, and Eliot, among others. According to the petition, the fact that these poets are all white males is "hostile to students of color" and thus the course should no longer be a requirement.

In particular, we oppose the continued existence of the Major English Poets sequence as the primary prerequisite for further study. It is unacceptable that a Yale student considering studying English literature might read only white male authors. A year spent around a seminar table where the literary contributions of women, people of color, and queer folk are absent actively harms all students, regardless of their identity. The Major English Poets sequences creates a culture that is especially hostile to students of color.

When students are made to feel so alienated that they get up and leave the room, or get up and leave the major, something is wrong. The English department loses out when talented students engaged in literary and cultural analysis are driven away from the major. Students who continue on after taking the introductory sequence are ill-prepared to take higher-level courses relating to race, gender, sexuality, ethnicity, nationality, ability, or even to engage with critical theory or secondary scholarship. We ask that Major English Poets be abolished, and that the pre-1800/1900 requirements be refocused to deliberately include literatures relating to gender, race, sexuality, ableism, and ethnicity.

Yikes. Where to begin?

It is extreme arrogance on the part of the petitioners to dismiss poets such as Chaucer and Milton as just white men that can't possibly connect with anyone who isn't a straight white male. Their work is the building blocks of modern storytelling and literature. It is valuable. It would be an extreme oversight to not closely study the work of some of the finest English poets off all time. Plus, as Reason's Robby Soave pointed out, there simply weren't very many LGBT modern poets. It's too late now for a woman living in 14th-century England to write poetry on the level of Canterbury Tales--societal roles were different back then, for a multitude of reasons. It doesn't fix the past to ignore the art that actually emerged from it.