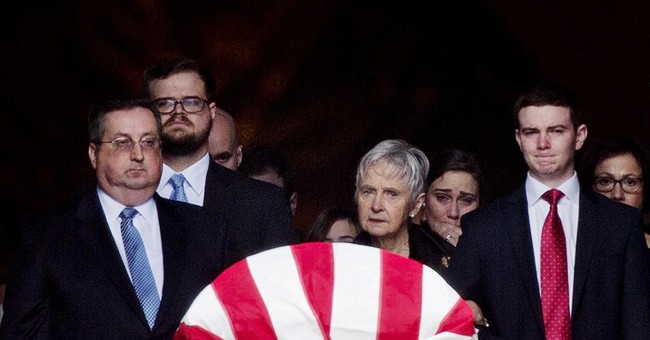 Supreme Court Justice Antonin Scalia passed away on Saturday, February 13, at age 79. On Friday, he lay in repose in the Great Hall of the Supreme Court, and the public was invited to pay their respects between 10:30 a.m. and 8:00 p.m.

Lines to get in to the Supreme Court stretched around the block, and some people waited hours to pay their respects.

Visitors who attended the viewing were given a card and were invited to sign the guestbook.

And others left broccoli, applesauce, and other trinkets in memoriam at the court--all things that were famously mentioned in Scalia dissents.

Yesterday, there was a funeral Mass for him held at the National Shrine of the Immaculate Conception, the largest Catholic Church in North America. His son, Fr. Paul Scalia, a priest in the Diocese of Arlington, was the principal celebrant and homilist. (Justice Scalia reportedly did not like eulogies and thus was not given a traditional eulogy.)