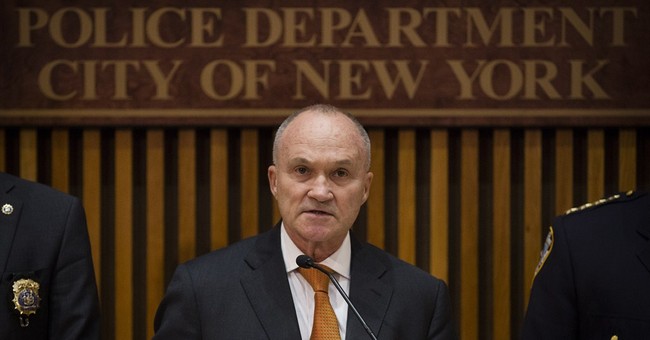 NYC Police Commissioner Ray Kelly was supposed to give a speech Tuesday at Brown University, an Ivy League institution located in Providence, RI. His speech was canceled, however, 27 minutes after it was due to start after protestors would not stop screaming and accusing Kelly of racism.

Kelly was supposed to speak about "proactive policing," aka "stop and frisk." "Stop and frisk" was recently declared to be unconstitutional. Unfortunately for those in attendance, Kelly was unable to give his remarks due to a highly-organized protest that included signs and chanting.

From the Providence Journal:

Many of those who disrupted the program appeared not to be Brown students.

Various factions seemed organized and rehearsed, standing in unison to chant slogans. Many individuals stood and recited short speeches from cue cards — squares of cardboard onto which had been pasted typewritten sheets.

An hour before Kelly’s planned appearance, several dozen students gathered on College Street outside the List Arts Center and marched in a picket line to the thumping of makeshift drums — trash cans and paint cans were popular. They carried picket signs declaring “Ray (cist) Kelly” and “Don’t honor the police state,” among others.

The program was sponsored by Brown's Taubman Center for Public Policy. Prior to the speech, Marion Orr, director of the Taubman Center, urged the crowd to behave in a civil manner. This request was met with jeers from the rowdy crowd. Eventually, the situation got so tense that Kelly was removed from the room.

Brown University president Christina H. Paxson released a statement condemning the actions of the protestors, and referring to the disruption of the event as a "sad day" in Brown's history.

While I am pleased that Brown gave a swift and appropriate response to the incident, I am very disappointed and dismayed by the actions of the crowd of protestors. By not allowing Kelly to speak, they did a disservice to their classmates and to their college community. Brown is an elite, Ivy League institution. Their students should know how to conduct themselves in the face of someone they do not like. The event could have been eye-opening and informative, but instead, it turned into a lesson of Alinksy-esque activism.