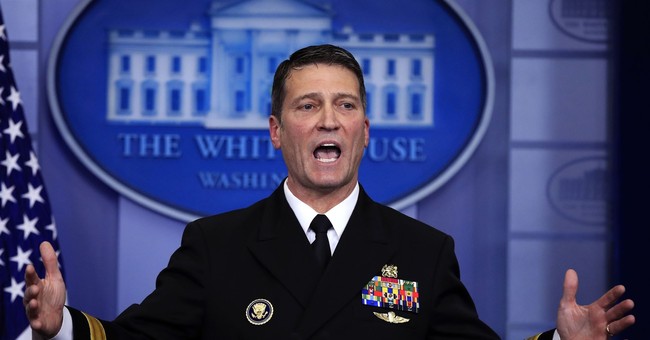 Jackson has had a long career both as a doctor and a military service member, but he has never held an administrative position quite on par with running the VA, which has hundreds of thousands of employees spread out over 170 medical centers and 1,061 outpatient clinics across the country.

Nevertheless, the White House is confident that a relative outsider to the world of government bureaucracy is exactly the person to try to fix it. As White House Deputy Press Secretary Raj Shah explained in an interview with Fox News:

“We think Dr. Jackson will make a tremendous Secretary of Veterans Affairs. This is a man who as a doctor understands medicine, as an active duty member understands the military …

"We've had kind of bureaucrats or individuals who understand, kind of have the experience and resumé of, you know, hospital organizations ... and they haven't fixed the problems."

So, what life experiences and qualifications will Jackson bring to the VA?

According to his Navy biography, Jackson is a native of Levelland, Texas. Having received a Bachelor of Science in marine biology from Texas A&M University, Jackson went on to study medicine at the University of Texas Medical Branch and obtained his medical degree in 1995.

That same year, he also began his active duty service in the Navy, going on to hold a wide variety of different positions during his residency over the next decade, including a stint as a diving safety officer at the Naval Safety Center in Norfolk, Virginia.

Jackson came to specialize in submarine, hyperbaric, and emergency medicine before finally completing his residency in 2004. In 2005, Jackson put his skills to the test when he deployed to Iraq to lead a “Surgical Shock Trauma Platoon” near the frontlines of active combat in the Sunni triangle in cities like Ramadi and Fallujah.

In 2006, President George W. Bush pulled Jackson out of Iraq to have him serve as a White House physician. Since that time, Jackson has held several different positions of responsibility as a doctor for the presidents and their staff. Most prominently, in 2013, Obama selected Jackson to become his personal presidential physician, and Trump has kept him on in the same role.

Earlier this January, Jackson reportedly won Trump’s trust and admiration after his public defense of Trump’s mental and physical health in an hour-long press conference.

According to CBS News:

Jackson's name was not among the roughly half-dozen candidates the White House was said to be actively reviewing in recent weeks. But Mr. Trump has formed a close bond with his doctor in the hours they've spent together at the White House and traveling on Air Force One.

Mr. Trump has told aides and outside advisers that he is fond of Jackson personally, according to a person familiar with the president's thinking but not authorized to discuss private conversations.

The president was also impressed with Jackson's performance at the podium in January, telling aides that he liked Jackson's smooth turn before the cameras and ability to field reporters' questions as he offered a glowing report on the president's physical and mental well-being.

During the briefing, Jackson spent nearly an hour exhausting reporters' questions, extoling the president's "incredible genes" and joking that if only Mr. Trump had eaten a healthier diet over the last 20 years, "he might live to be 200 years old."

Jackson also used the briefing to effectively dismiss rumors that Trump is suffering from mental illness, reporting that Trump attained a perfect score on the “Montreal Cognitive Assessment,” a psychometric test that is typically used to evaluate people for Alzheimer’s disease or other milder forms of dementia.

I knew Dr. Ronny Jackson in the White House. In my experience, he was very good guy and straight shooter.

Dr. Jackson is a phenomenal doctor and a really great guy. He and his team took great care of all of us for many years

there is no one better than ronny. no one. he is a saint and patriot. https://t.co/rMTFZTdP2s

After Trump made his announcement on Wednesday about wanting Jackson to take the reins of the VA, some Senate Democrats expressed their skepticism about Jackson’s qualifications.

Sen. Jon Tester, the top Democrat on the VA committee, praised Shulkin for serving “honorably” and said he looked forward “to meeting Admiral Jackson soon and seeing if he is up to the job.”

Sen. Tammy Duckworth, a wounded Iraq veteran who also served as an Assistant VA Secretary, was more blunt. She said that by “choosing chaos over consistent leadership, Donald Trump is hurting veterans around the country.”

“Over the coming weeks, I will carefully review Dr. Jackson’s qualifications to determine whether he has the best interests of our veterans at heart or whether he, like many in the Trump administration, wants to push VA down the dangerous path of privatization.

"I will also review whether a currently-serving active duty military officer is eligible to serve as a politically appointed Cabinet Secretary.”

Sen. Bernie Sanders, who also serves on the VA panel, was also pointed in his criticism.

"Our job is to strengthen the VA in order to provide high-quality care to our veterans, not dismember it,” he said in a statement. "The Senate Committee on Veterans Affairs should not approve any nominee for secretary who supports the privatization of the VA.”

Whether or not Jackson will ultimately get his chance to serve at the head of the Department of Veterans Affairs is now in the hands of Congress, which has yet to set an official date for a confirmation hearing.