Kim Jong Un Pledges Denuclearization, But Can Trump Trust Him? 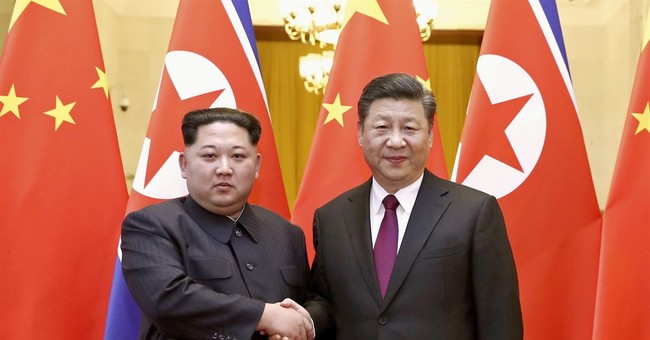 "It is our consistent stand to be committed to denuclearization on the peninsula, in accordance with the will of late President Kim Il Sung and late General Secretary Kim Jong Il…

"The issue of denuclearization of the Korean Peninsula can be resolved, if South Korea and the United States respond to our efforts with goodwill, create an atmosphere of peace and stability while taking progressive and synchronous measures for the realization of peace.”

In spite of Kim’s reassurances, foreign policy experts are not so sure that he or his country can truly be trusted to engage in complete denuclearization.

"While that’s better than his outright rejection of denuclearization to date, it’s not very persuasive in light of his actions and his caveats about the need for the U.S. to first create the right ‘atmosphere.’”

Analysts are also concerned that China and North Korea’s understanding of denuclearization is quite different from Washington’s. Zhao Tong, a North Korea expert for the Carnegie-Tsinghua Centre in Beijing, told Reuters that “China is not really demanding or requiring that [North Korea] dismantle its [nuclear] weapons."

Instead, China and North Korea are expected to try and get the United States to sign a deal in which the Kim regime commits to stop further nuclear and missile testing and maybe even cap its military spending in return for the Trump administration loosening or eliminating sanctions on North Korea and making other concessions limiting U.S. military activity in the region.

But the Trump administration does not appear willing to simply accept this kind of a compromise.

In an interview with Radio Free Asia this past Friday, Trump’s new national security adviser John Bolton explained what his advice to Trump about North Korea would be [emphasis mine]:

“I think he's very familiar with the history of North Korea's duplicity on this subject. I don't think he has any illusions about this regime. I don't think he wants to waste a lot of time talking to them without the prospect of success.

"You know there a lot of considerations here but I believe that it could become very clear very early in this meeting whether North Korea is serious or not or whether they're just playing games, and so I think it's important if the president sees that they're just looking for a way to waste time, that he make the point that he's not there to waste time and that we expect real denuclearization, not talks about talks about denuclearization, but concretely how we're going to eliminate their program as quickly as possible.

"So if the meeting takes place, we'll see if that's the path that they follow.”

Bolton is correct about North Korea’s tendency for lying to its negotiating partners, particularly on the issue of denuclearization. In the recent past, North Korean leaders have committed to refraining from nuclear arms development multiple times even while simultaneously maintaining secret nuclear weapon programs.

In fact, in 1994, then-President Bill Clinton signed an agreement with North Korea to give them $4 billion in fuel aid over the next decade in return for a gradual dismantling of the Kim regime’s nuclear program.

However, by 2003, North Korea had withdrawn from the nuclear weapons Non-Proliferation Treaty and was actively refusing to ever give up its nuclear program in repeated rounds of six-party talks with China, the United States, Japan, South Korea, and Russia.

Also important to keep in mind is the fact that given U.S. foreign policy in the Middle East and North Africa over the past two decades, especially our leadership role in military operations that resulted in the removal from power and killing of Iraqi dictator Saddam Hussein and Libyan ruler Moammar Gadhafi, Kim is unlikely to accept American guarantees that he and his government will be safe from future U.S. interventions if they give up their nuclear stockpiles.

Thus, even if Kim makes some kind of agreement with Trump to give up his nukes, it is unlikely (although not impossible) that North Korea would ever truly turn over all of its nuclear assets.