PHOTOS: ‘March for Our Lives’ Displays the Left’s Hatred, Hypocrisy, and Naiveté 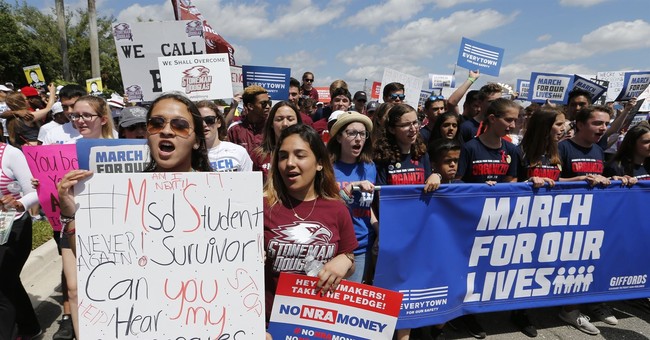 Photographs below by Micah Rate

Saturday was a big day for Washington as more than 200,000 demonstrators descended on the nation’s capital to push for stricter gun control laws.

The overarching message of the "March for Our Lives" was pretty simple — supporters of the Second Amendment must be stripped of both their political power and their guns. All lawmakers and groups like the NRA who oppose “common sense” gun control legislation only do so because they love their guns or their political contributions more than children’s lives.

Thousands of individual protestors who attended the march took this message to heart, brandishing their own homemade signs with pro-gun control, anti-NRA, and anti-GOP slogans for the whole world to see. While some of these were relatively innocuous or just driven by tired clichés ("Arms are for hugging"), others put gun control advocates’ hatred and contempt for Second Amendment supporters and their rights on full display.

At around 9:00 AM, one of the first groups of protestors gathered in Washington’s Folger Park, just a short walk from the Capitol building. They were there to attend the Rally for D.C. Lives, a preliminary event organized by local politicians to help support the March for Our Lives and advocate for D.C. statehood.

One of the first and most obvious sights to see at this event was a huge red wheel displaying the locations and numbers of victims killed at several recent mass shootings with the (literally) overlying message: “Ban AR-15s.”

A man to the right of the wheel can be seen holding one of the event’s official, professionally produced signs promoting the benefits of D.C. statehood, namely that there would be three more votes in Congress “4 Our Lives” to enact gun control.

Another protestor at the rally had his own homemade sign promoting a dual message mocking politicians for offering “tots and pears” (thoughts and prayers) to victims of gun violence and accusing Republicans of only supporting gun rights because of bribes from the NRA.

As the rally ended, its organizers began assembling a march over to the main event. Carrying banners with slogans like “Decriminalize Blackness” and “Organize Resistance,” a vanguard of Black Lives Matter activists led the procession out of the park, chanting: “No justice, no peace… Disarm the police… No guns in our streets… No AR-15s.”

But wait! A pop quiz for all the student activists out there: Did you catch this juxtaposition of messages from the video above?

So, while the marchers believe that police are demonic racists who target “black and brown” people for no other reason than the color of their skin, they also want to make sure you know that white men in America are toxic, evil, and must be “dismantled,” whatever that means.

As the march proceeded down the streets of Washington, armed police stood alongside the demonstrators and at intersections to protect them and make sure that traffic was stopped or cleared out. At the same time, several protestors held signs aloft saying: “Redefine Safety, Disarm the Police.”

Other marchers carried posters with more standard slogans decrying the Second Amendment as a useless relic of the 18th century:

A small patrol of motorcycles and a police car steadily advanced ahead of the demonstrators to guide them to their ultimate destination just beyond Capitol Hill.

As the protestors approached the National Mall, an anti-free speech chant erupted from the crowd calling for the abolition of the NRA.

Once everyone arrived at the main event, it immediately became clear that a massive group of people had turned out in support, and protestors were just as expressive there as they had been at the previous rally. With pop rock classics playing loudly in the background, thousands of people packed onto Pennsylvania Avenue to prepare for the rally’s mix of songs, speeches, and pre-prepared video-shorts, and they brought their own political messages along with them.

Hundreds of people packed onto the steps in front of the Federal Trade Commission to promote the march’s main theme:

From my experience in the crowd, the vast majority of people who did show up to the March for Our Lives had similar messages to the one above, expressing some form of the argument that gun control will either entirely eliminate or seriously reduce mass shootings and gun murders, thereby saving people’s lives.

Another common theme was the idea that gun control advocates must come out in November to vote Republicans lawmakers out of office. One imaginative sign to this effect that had been scribbled on the side of a cardboard box simply said: “Castrate Trump’s Agenda, VOTE #BlueWave.”

Just as with the original sign mocking politicians’ “tots and pears,” another common feature of the March was signs like this (spelling errors and all) lamenting politicians' offerings of thoughts and prayers in the aftermath of mass shootings or lambasting them for taking contributions from the NRA:

However, all of these signs were nothing compared to the many iterations of “F*ck the NRA” or “The NRA is a Terrorist Organization” that were on display. Some of the more creative protestors from the crowd even tried to come up with new meanings for the group’s acronym.

For example, this demonstrator decided to trash the NRA and its supporters as “Nauseating Redneck A**holes” who should have had their guns confiscated by Obama:

In the end, however, the demonstrators were there not to listen to each other. They had come to hear the new celebrity stars of the Parkland school shooting, and these survivors' message could not have been clearer.

Over the course of the next three hours of relentless sloganeering, retelling of gun violence horror stories, and numerous musical performances from artists like Miley Cyrus, Jennifer Hudson, Common, and Ariana Grande (just to name a few), one moment that stood out for me was when Delaney Tarr told the vast crowd:

"When they give us that inch, that bump stock ban, we will take a mile. We are not here for breadcrumbs, we are here for real change."

The "March for Our Lives" organizers may not get their dream — their "real change" — for as long as Republicans control Congress, but that's no guarantee against the damage that future waves of indoctrinated millennials and Gen-Zers could inflict on our Second Amendment rights.

As long as millions of Americans are convinced by the news and entertainment media to believe that these rights are actually causing people to be murdered, then phenomena like the "March for Our Lives" will only become larger, louder, and more frequent in the future.