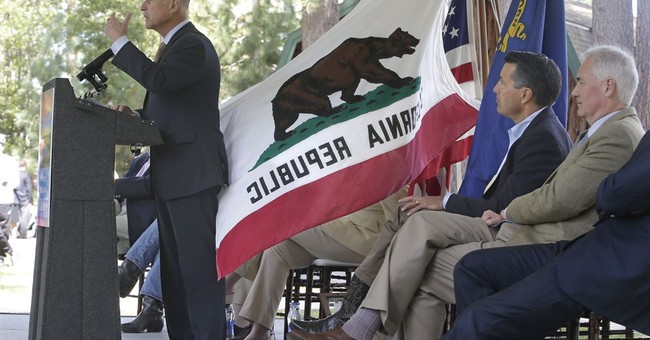 On Monday, the city government of Los Alamitos rose up in defiance of California’s sanctuary state law by voting in favor of an ordinance that exempts local authorities from obeying potentially unconstitutional state limits on federal immigration enforcement.

Known euphemistically as the “California Values Act,” California Senate Bill 54 (SB 54), which went into effect at the start of this year, established the state as the premier destination for illegal immigrants who want to circumvent federal law. The law places a whole slew of limits on state and local police designed to prevent them from cooperating with federal law enforcement to deport illegals from the country, including but not limited to:

2) Prohibiting them from asking anyone they interact with about whether or not they are in the U.S. illegally

3) Preventing them from using their money and law enforcement personnel to “investigate, interrogate, detain, detect, or arrest persons for immigration enforcement purposes”

Unhappy with SB 54’s blatant attempt to subvert the U.S. Constitution and undermine the rule of law, Los Alamitos City Council member Warren Kusumoto introduced an ordinance to nullify the bill and direct municipal police to cooperate with federal law enforcement. (Read the ordinance here by searching for "ORDINANCE NO. 2018-03.")

On Monday evening, hundreds of locals gathered both inside and outside the city’s council chambers to attend a hearing about the ordinance. Given the small population of the municipality (roughly 11,600), community turnout was quite impressive. From the large crowd present at the meeting, 53 separate speakers were allowed to approach the main dais and address the council directly. According to the Orange County Register, both the testimony from these speakers and the informal debates happening among attendees got quite heated at times [emphasis mine]:

“There’s been a real shift to a national, xenophobic acceptability in our society that is heartbreaking,” said Rabbi Jonathan Klein, executive director of the Clergy & Laity United for Economic Justice group. “We’re in an era of open bigotry.”

“I believe in the law. I live here and I couldn’t be prouder,” said Chris Cornell, 57, one of the residents waiting outside quietly while a screaming match ensued nearby.

Rev. Melinda Dodge, of Los Altos United Methodist Church in neighboring Long Beach, said the proposal goes against everything the community believes in and values.

One woman hailed the council members as “pioneers” and urged them to pass the ordinance. Two young children pleaded they vote against it.  Others protested the proposal and said it doesn’t represent the values of the community. Some, including a representative from the ACLU, warned the council that if approved, the new local law would lead to a lawsuit.

“If you could build a big, beautiful wall along the 605 (Freeway,) even though that would inconvenience me tremendously, I would give you a thumbs up,” Long Beach resident Janet Wess told the council.

Samantha Reed, 19, a UC Irvine freshman who graduated from Los Alamitos High, told the council that she won’t forget election-time if members vote for the proposed ordinance.

“You do not represent me by passing this ordinance,” Reed said.

One long-time resident, Javier Mejia, choked up as he described that he’s proud of his Mexican heritage but is “100 percent American.” He urged the council to vote for the proposed ordinance.

According to video taken at the event, one of the speakers who spoke in opposition to the ordinance compared ICE agents to Nazis when she argued that: “As I read about ICE rounding up the suspected illegal immigrants with common surnames, many are law-abiding citizens, and it reminds me of Nazi Germany.”

Another speaker who addressed the council in support of the ordinance made the more cogent argument that: “We have the law of the land, and that constitution says that the federal government is in charge of immigration law, not the state of California.”

Ultimately, the council voted 4-1 in support of the ordinance and amended it to include a directive to the Los Alamitos city attorney to write an amicus brief supporting Attorney General Jeff Sessions’s federal lawsuit against California for its sanctuary state policies.

Councilman Mark Chirco, who was the sole dissenting voice in Monday’s vote, took to his official Facebook account afterwards to express his fear that the State of California will now target the small city for a legal challenge:

“When I joined the city council, I vowed that every single vote I would make would be to protect and further the interests of the citizens and businesses of Los Alamitos. I often have disagreements with the laws that are passed in Sacramento. However, after carefully weighing both sides of a very complicated and emotional issue, I could not see how the ordinance proposed tonight would benefit our city. Rather, the ordinance will place our city in danger of a costly and uphill battle with the State of California. For these reasons, I cast the lone vote against the ordinance. I believe our small city is not the appropriate venue nor does it have the resources to fight this battle.”

Although Chirco did not mention them by name, he is also likely worried about the ACLU’s threat to take legal action against the city.

The council will have to vote again on April 16th to formally adopt the ordinance into law.

In the meantime, pro-illegal alien activist groups like the ACLU have already called on their supporters to increase pressure on city authorities to back down:

CORRECTION: While the ordinance was approvingly introduced, it will not be officially voted on until April 16.

Keep the pressure up & urge the Los Alamitos City Council to do the right thing. Call, email, attend meetings, rally — your activism is need now more than ever. https://t.co/IQIafCWpwU