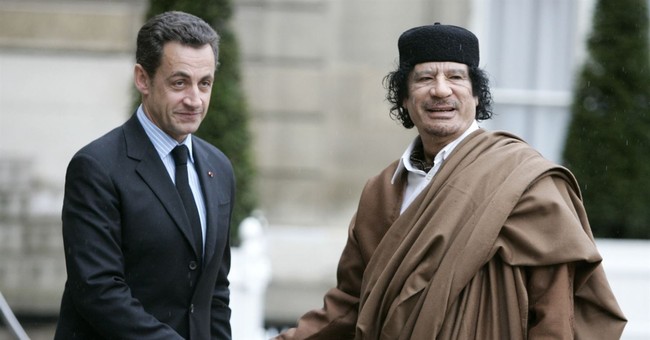 At the time, French law dictated that presidential candidates could only spend about 21 million euros in total for campaigning, and Sarkozy reported spending just under the limit.

Moreover, French law also prohibited foreign states or legal entities from making direct or indirect donations to candidates for any political office and required campaigns to maintain complete records of their sources for all donations.

According to French-Lebanese businessman Ziad Takieddine, there are serious reasons to doubt that Sarkozy and his campaign were being entirely honest with government authorities about the state of his campaign finances.

In an interview with Mediapart published in November 2016, Takieddine claimed that he personally delivered suitcases packed with five million euros worth of cash over the course of several trips to Claude Gueant, Sarkozy’s former chief of staff. The handovers reportedly took place in the Interior Ministry at the same time that Sarkozy was France’s interior minister. Takieddine said that he received the suitcases full of cash from Gadhafi’s intelligence chief while visiting the Libyan capital of Tripoli in 2006 and 2007.

When Mediapart first released their report detailing Takieddine’s claims, Sarkozy was in the middle of running for the 2016 presidential nomination of the center-right party “The Republicans.” Shortly afterwards, French journalist David Pujadas asked Sarkozy about Takieddine’s claims at a debate. Sarkozy was none too pleased about the topic being brought up, and he excoriated Pujadas (link is in French):

“What an indignity. We are at the service of the public. You are not ashamed…you are not ashamed to echo a man who has done time in prison, who has been condemned innumerable times for defamation, who is a liar. That is not the idea I have of public service. It’s a disgrace.”

In the meantime, French police, who had already been investigating Sarkozy for campaign finance crimes since 2013, pushed for more information after Takieddine’s allegations became public.

As a result, in 2017, Sarkozy was charged with a entirely separate violation of campaign finance laws wherein he allegedly used an external public relations firm to conceal the receipt of tens of millions of euros on behalf of his 2012 presidential campaign. According to the New York Post:

Sarkozy was accused of collaborating with a public relations firm to disguise the true expenditures of his Union for a Popular Movement party during the 2012 campaign.

The PR firm, Bygmalion, sent invoices to Sarkozy’s party instead of his campaign, enabling the UMP to spend nearly double the amount of money permitted under French campaign finance laws.

Just as with Sarkozy, Takieddine himself is no stranger to the often-murky world of campaign finance law. He had previously been faced with accusations that he provided illegal campaign funds to Edouard Balladur’s 1995 presidential campaign using commissions that he got from selling French submarines to Pakistan. If these allegations are true, then it seems perfectly plausible that Takieddine would still be involved with making cross-continental campaign funding drives a mere decade later.

Additionally, Gadhafi helping Sarkozy win the French presidency makes far more sense of the Libyan dictator’s December 2007 visit to France in which he concluded $14.7 billion in weapons and nuclear energy deals with the French government. It was Gadhafi’s first major visit to the West in decades. Although he had previously made certain political strides to please Western leaders — including his 2003 decisions to abandon Libya’s nuclear weapons program and pay victims of the 1998 Pan Am and 1989 UTA bombings of civilian passenger jets — it was not until after Sarkozy's alleged collusion with Gadhafi that the Libyan leader made his formal overture to smooth over relations with Europe.

In a strange, but perhaps not unrelated twist to the story, none of this newfound goodwill prevented Sarkozy from pushing (along with UK Prime Minister David Cameron) for the 2011 NATO-led air campaign that played an essential role in helping Libyan rebels to overthrow and ultimately kill Gadhafi. The resulting civil war between various rebel factions fighting for control of the Libyan government continues to this day.

According to the Associated Press, Sarkozy was last being held at a police station in Nanterre, which is located to the northwest of Paris. Under French law, he can be detained for up to 48 hours.