CIA Director: 'No Relief in Sight' for North Korea, 'Complete Denuclearization' Is the Objective 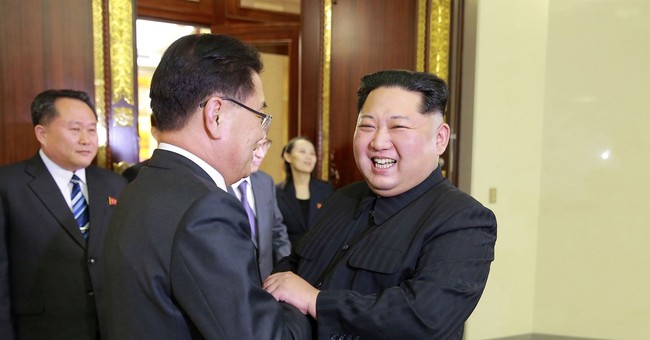 On Sunday, CIA Director Mike Pompeo appeared on CBS’s “Face the Nation” with Margaret Brennan to discuss the White House’s strategy on North Korea. He insisted that regardless of any future negotiations between the United States and the rogue nation, the “complete, verifiable, irreversible denuclearization” of the Kim regime remains the ultimate objective of the Trump administration.

On Friday, President Trump took the unprecedented step of accepting a proposal from Kim Jong-un to meet in person by May of this year to discuss North Korea’s nuclear and missile programs. Kim is reportedly open to giving up his country’s development of weapons of mass destruction, but it is not yet clear exactly what he would request in return.

Referring to these expected talks, Brennan opened her interview by asking Pompeo: “It's been three days since the president accepted this invitation. Has North Korea responded?”

Instead of directly addressing her question, Pompeo noted how much of an accomplishment it was to even get the North Koreans to the negotiating table, stressing that “for two decades, America whistled past the graveyard and allowed the North Korea-Korean regime to build up the capacity that this administration faced when it came into office.” Pompeo explained how he saw the U.S. government’s current approach on North Korea making a difference:

“President Trump took a different tact entirely, put an enormous global allies-supported pressure campaign on the North Koreans that has had a real impact on the regime, on the North Korean economy and has caused Kim Jong-un to reach out and say that he wants to begin to have discussions on terms that the United States has never achieved before.”

The “pressure campaign” that Pompeo is referring to is the U.S.-led effort to place crippling sanctions on North Korea, which do appear to have had a significant impact on the hermit kingdom’s economic health. In fact, according to the BBC, restrictions on North Korean exports of textiles, coal, and seafood have seriously hurt the already-poor country, wiping out as much as a third of its total economic growth in 2017.

On “Face the Nation,” Pompeo laid out the chief objective of both his agency and the entire executive branch in pursuing such measures against the Kim regime:

“We’re going to work hard to make sure that we get what it is the president has set out very clearly for his entire time in office, which is the complete, verifiable, irreversible denuclearization of North Korea.”

Pompeo went on to make clear that the administration is not going to start playing nice with Kim just because of the dictator’s new promises that he wants to denuclearize and stop developing new ways to launch nukes at the United States and its allies.

The CIA director assured Brennan and CBS’s viewers that “this administration has its eyes wide open and the whole time this conversation takes place, the pressure will continue to mount on North Korea. There is no relief in sight until the president gets the objective that he has set forth consistently during his entire time in office.”

Trump expressed a similar sentiment on Twitter on Thursday:

While an actual in-person meeting between a sitting U.S. president and North Korea’s leader would be a novel development, an agreement between them on denuclearization would not be. In 1994, President Bill Clinton agreed to provide North Korea with $4 billion in energy aid in exchange for…wait for it…denuclearization. Clinton praised the deal at the time:

“This is a good deal for the United States. North Korea will freeze and then dismantle its nuclear program. South Korea and our other allies will be better protected. The entire world will be safer as we slow the spread of nuclear weapons.”

Well that didn't quite work.

Just a couple of decades later, we still have the same problem. The only major difference now is that North Korea is reportedly researching intercontinental ballistic missiles that can reach the mainland United States with their nuclear payloads.

Thus, if successful negotiations fail to materialize, we're not just looking at the possibility of some devastating nuclear strikes limited to East Asia, but potential attacks against the heart of America itself.

Check out the full "Face the Nation" segment with CIA Director Pompeo here.