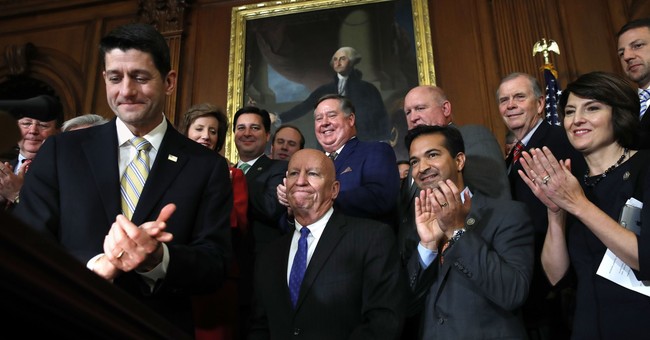 In the continuing political aftermath of the Parkland, Florida school shooting, House Republican incumbents facing tough races this November are increasingly turning towards supporting gun control measures in Congress, according to an analysis from Reuters.

Leading the pack of new pro-gun control Republicans is Rep. Carlos Curbelo of Florida’s 26th district, who has “expressed support for raising the age of purchase for long guns, banning civilian purchases of military style weapons, and regulating high-capacity magazines,” according to his Chief of Staff. This is the level of gun control typically supported by California Democrats like Sen. Diane Feinstein, and yet, as of now, Curbelo still has a "B+" rating from the NRA. (Every other Republican lawmaker mentioned in this article has an "A" rating from the NRA.)

For the most part, even the Florida congressman’s colleagues who have called for more stringent gun control measures after the Parkland school shooting are acting noticeably more restrained than him in their gun control virtue signaling, but a couple have proposed concerning new measures that would strip people of their Second Amendment rights without due process.

For example, Rep. Dana Rohrabacher of California’s 48th district is calling for the creation of a “federal list” that can be used to deny gun sales to people who use psychiatric prescription drugs and convicted felons. Putting aside the question of whether or not we really need to track down and disarm everyone on Xanax lest they turn into the next Nicholas Cruz, Rohrabacher is 50 years behind the times if he thinks that felons can legally acquire modern firearms. According to the ATF:

The Gun Control Act of 1968 (GCA) prohibits felons and certain other persons from possessing or receiving firearms and ammunition (“prohibited persons”). These categories can be found at 18 U.S.C. § 922(g) and (n) in http://atf.gov/publications/download/p/atf-p-5300-4.pdf.

However, Federal law does not prohibit these persons from possessing or receiving an antique firearm. The term “antique firearm” means any firearm (including any firearm with a matchlock, flintlock, percussion cap, or similar type of ignition system) manufactured in or before 1898.

Perhaps the congressman is genuinely concerned about felons going on a mass shooting spree with a Brown Bess or a 17th century replica from the Jamestown history museum, but it seems more likely that he just doesn’t know what he’s talking about.

Rep. John Faso of New York’s 19th district has been much more vague than Rohrabacher, but he also appears to now support some sort of new background check list that would prevent people with clean criminal records from buying guns:

"We need to really seriously examine the means by which individuals who are not adjudicated of a particular offense can be placed on a background check list.”

According to Reuters, Faso also supports legislation banning anyone under 21 from purchasing semi-automatic firearms.

In the meantime, Rep. Ryan Costello of Pennsylvania’s 6th district is launching a late campaign for the Democratic primary by calling for “commonsense” gun control policies “to reduce gun violence in society.” Towards this end, Costello supports banning bump stocks, “increasing and enhancing background checks” (whatever that means), and striking down any bill for concealed carry reciprocity.

This last position is particularly striking, as the current state level patchwork of concealed carry reciprocity laws is a real legal mess that can and should be resolved at the federal level, especially given that the Constitution’s Full Faith and Credit clause (Article IV, Section I) already appears to recommend such a law:

In other words, the Constitution explicitly allows Congress to force state governments to respect other states' legal determinations and records, so why shouldn’t they require all states to respect one another's lawfully issued concealed carry permits? That seems pretty “commonsense” to most conservatives.

Rep. Don Bacon of Nebraska’s 2nd district has been much more circumscribed in his support of gun control. Although he initially supported allowing teachers to be armed in schools, Bacon now opposes the measure after some liberal Nebraska school superintendents told him that they didn’t like that solution:

Congressman @RepDonBacon meets with metro superintendents about school security. The conversation changed his stance on teachers having the choice to being armed with guns. @3NewsNowOmaha VIDEO: pic.twitter.com/jFiE5PU4u7

I introduced the Stop Straw Purchases Act w/ @RepCarbajal. HR 5134 will increase punishments for those who buy gun for one who's prohibited by law from having gun. Officer Orozco was killed by a gun obtained through a straw purchase- purchaser walked away with slap on the wrist. https://t.co/c5YFtza2kT

Rep. Steve Knight of California’s 25th district has had the most tepid and ambiguous pro-gun control shift of all, simply telling the press: "I believe there is a bipartisan path forward for meaningful legislation that protects people's rights while also protecting our children while in school and our families while in public spaces." This kind of response sounds more like meaningless rhetorical wordplay and political hedging than anything substantive, but Knight did sign an October 11th letter to the ATF last year calling for a “reevaluation” of the legality of bump stocks along with Rep. Curbelo, Rep. Bacon, and Rep. Costello (79 members of Congress signed the letter).

The Reuters analysis of Republican lawmakers' statements can be found here (and in this accompanying article).