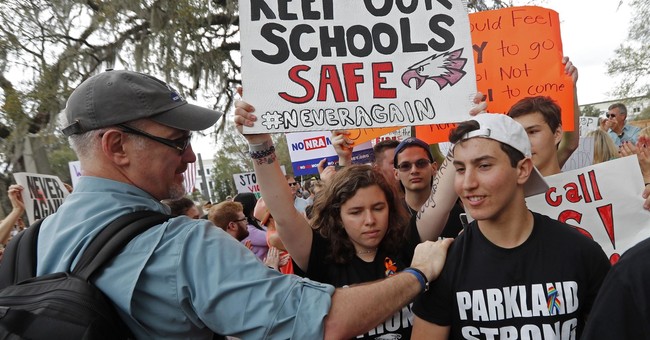 No, that's not a mistake in the headline.

In Stockton, California, local students at Stagg High School walked out of their classes on Friday to protest against gun violence, repeatedly chanting “no more guns” as they milled about outside. The protests suddenly turned violent after a hundred students reportedly jumped the fence surrounding the school and proceeded to attack police and throw rocks at their squad cars and other vehicles parked nearby. One local resident whose car windows were smashed told NBC News:

According to local NBC affiliate station KRCA 3, at least one police officer was attacked by some of the students when he tried to prevent them from leaving the school grounds. The students fought with him and at least one of them stole the officer's police baton. A civilian bystander had to help the lone officer until more cops arrived as back-up.

Stockton police ultimately arrested five Stagg High students on charges of “battery on an officer, resisting arrest, taking an officer’s baton and vandalizing vehicles.” The suspects range from 14 to 18 years old. The one 18 year-old of the group was immediately booked into a local jail for processing.

Hundreds of students at other local schools also ditched classes to protest in favor of gun control, but did not vandalize private property or attack police.

The Stockton Police Department's Public Information Officer Joe Silva spoke to the press about the incident:

“We do support the freedom to protest peacefully and freedom of speech [...]. While the majority of the students were peaceful today, we don’t condone the violence which was committed by a small handful of students. It’s unacceptable to batter a police officer and especially to take an officer’s baton.”

Local school officials also released a statement about the protest, citing their approval of the peaceful anti-gun protests:

"Stockton Unified is proud of the peaceful, well organized protests carried out by students on its high school campuses this week. We regret that on Friday some students from one of the high schools left a peaceful protest, walked off campus and created a disruption in the neighborhood. Such activity is not reflective of the values of the overwhelming majority of SUSD [Stockton Unified School District] students and will not be tolerated."

Click here for a video report about the incident.