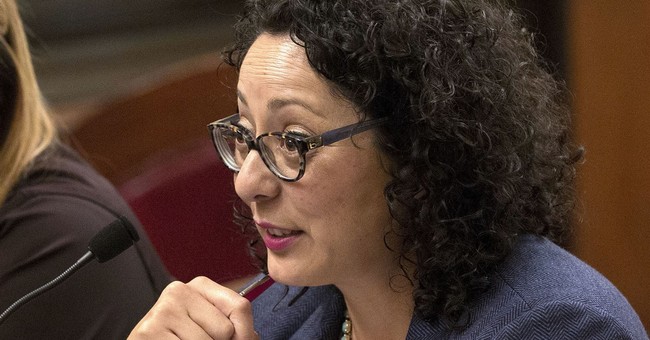 Last December, California Assemblywoman Cristina Garcia rose to national prominence as one of Time’s Persons of the Year for her leadership role in the #MeToo movement. Now, she is facing a growing chorus of former employees who are accusing her of engaging in serial sexual misconduct while under the influence of alcohol.

I didn’t know I was part of the story. That I was pictured and added to a timeline of this reckoning. It’s an awkwardly humbling experience, but I am proud of this work and the company I am in. I hope you’ll pick up a copy of @TIME &read about the bravery.#MeToo #WeSaidEnough pic.twitter.com/P1bfCDPKCf

On February 8th, Politico reported the first allegations against the assemblywoman from Daniel Fierro, one of her former staffers. He told the publication that in 2014, after the California Assembly’s annual softball game, he stayed behind to clean up one of the field’s dugouts. An apparently drunk Garcia then cornered him in the enclosed space, stroked his back, and grabbed his butt before trying to grab his crotch, at which point the staffer fled.

The same Politico report also featured accusations from an anonymous “prominent Sacramento lobbyist” who similarly alleged that Garcia tried to grab his crotch at a fundraising event in 2017 while inebriated:

The lobbyist, who represents a major industry association, said that Garcia appeared to have been drinking heavily at a fundraiser hosted by Governor Jerry Brown for state Senator Josh Newman at the de Veres bar in Sacramento. He said he was heading out the door in part to avoid the assemblywoman — who had been increasingly “flirtatious” and had called him on a few occasions before for late night drinks which he repeatedly declined.

She spotted him and said, “Where are you going?” the lobbyist said.

“She came back and was whispering real close and I could smell the booze and see she was pretty far gone,’’ he said. “She looked at me for a second and said, “I’ve set a goal for myself to fuck you.”

At that point, Garcia “stepped in front of me and reaches out and is grabbing for my crotch,’’ he said. That was “the line in the sand,” according to the lobbyist, and he stopped her. “I was four inches from her, eyeball to eyeball -- and I said, ‘That ain’t gonna happen.’”

Garcia voluntarily went on unpaid leave after the above allegations were referred to the State Assembly for investigation, but that has not stopped more accusations of inappropriate sexual misconduct from being leveled against her.

On February 14th, a lawyer representing four anonymous former Garcia staffers sent a letter to the California State Assembly Rules Committee detailing his clients’ allegations that the assemblywoman had created a “toxic” work environment where sexual harassment and heavy drinking were commonplace. According to the letter, which was obtained by a local California newspaper, Garcia routinely abused alcohol while on the job, pressured her employees to drink with her, and bragged to them in graphic detail about her sexual encounters with other California elected officials, including other legislators in their Assembly offices. The former staffers also characterized Garcia as an extremely vindictive and nasty person who would retaliate against people who criticized her.

As multiple outlets reported on Sunday, J. David Kernick, one of the letter's accusers, publicly revealed his name and filed a complaint to the California Department of Fair Employment and Housing alleging that Garcia fired him after he refused to play “spin the bottle” with her after a fundraiser at a whiskey bar.

After the first sexual misconduct allegations came out against her, Garcia issued a public statement with cookie-cutter feminist talking points that "any claims about sexual harassment must be taken seriously," but she also seemingly dismissed the claims by assuming that the Assembly's investigation of her would quickly clear her name. According to The Sacramento Bee, Garcia said in the same statement that “I implore the Assembly Rules Committee to conduct a thorough and expeditious investigation, and I look forward to getting back to work on behalf of my constituents and for the betterment of California.”

However, after the subsequent allegations of sexual harassment and wrongful termination, Garcia went on the offensive against her accusers. According to The Washington Post, Garcia has alleged that some hidden force is conspiring against her by hiring private investigators to "smear her reputation" and issued a blanket denial of any allegations of misconduct against her:

On Wednesday, she wrote on Facebook: “I will add that in order for legislators to accomplish all we want for the people of our districts and the people of California, we need talented staff who feel empowered to do their work. … I am confident I have consistently treated my staff fairly and respectfully.”

In her statement, Garcia said someone had hired a private investigator in an effort to smear her reputation.

Tenants at properties she owns reported to her last November that the private investigator had knocked on their doors asking questions about her ethics as a landlord, Garcia said. Former staffers also told her that they had received calls from the investigator asking if she was an abusive boss, or whether they would believe allegations that Garcia had committed a sexual misconduct and had problems with alcohol, she said.

Garcia's former chief of staff Tim Reardon has come to his former boss's defense, also taking the line that there is some grand conspiracy against her:

Tim Reardon, who served as Garcia’s chief of staff in 2014, called the complaint a “complete falsehood.” He said Kernick was warned for not doing his job, was encouraged to do better and was fired when his work did not improve.

“If Mr. Kernick wants to talk about his time working there, then he ought to open up his own personnel records and let people see what was written in there,” Reardon said.

He said he never received any formal or informal complaints about Garcia or the office environment during his time as chief of staff. He believes the allegations are part of a political attack against Garcia, though he does not know who is behind it.

“It’s like a malicious, really bizarre alternate universe built on a lot of innuendo and lies solely to destroy to character of Assemblywoman Garcia,” Reardon said. “That’s all that I can see.”

As a local leader of the #MeToo movement, Garcia has not accepted such denials from others accused of sexual improprieties. According to The Sacramento Bee, she has pushed to expel California lawmakers that have been accused of sexual misconduct from the Assembly:

Garcia is an outspoken leader of the “Me Too” movement in California. She has called for male lawmakers accused of sexual harassment, assault and misconduct to step down over the last several months and refused to work with them. She was one of 147 women who signed a letter drawing attention to problems under the Capitol dome in October.

She co-authored a bill to provide whistleblower protections for legislative employees and her photo appeared in Time magazine’s “Person of the Year” issue in December highlighting women who have spoken up about sexual harassment. Garcia and other women lawmakers wore all black on the Senate and Assembly floors to extend the protest at the Golden Globes ceremony.

Of course, it is possible that the allegations against Garcia are untrue, or even that some people may be conspiring to smear her reputation. However, it's extremely difficult to take her denials seriously given the assemblywoman's history of using similar allegations against other legislators to assume their guilt and demand their expulsion from power.