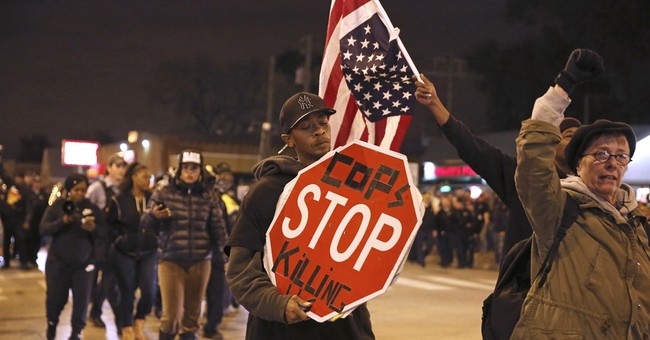 On Wednesday, NBC News released an extensive database of hundreds of thousands of tweets from purported Russian bot and troll accounts active on Twitter during and after the 2016 election. According to its own data showing the tweets of ten of the most influential Russian accounts, three of these were actively involved with promoting Black Lives Matter and its related causes, including extremely incendiary anti-cop rhetoric.

One such account was @bleepthepolice, which, as one might expect, was no fan of American law enforcement. Its most popular post included a video of a man comparing black Americans’ experience with the police to trauma experienced by soldiers suffering from PTSD (link to the video cited by the tweet):

The following is a list of tweets from @bleepthepolice according to the NBC database. Due to most of the posts not being archived, pictures or videos that may have accompanied the tweets are missing, but the text of the tweets makes the @bleepthepolice's message pretty clear nonetheless (text of each tweet is separated by a space; "..." means tweet text was not fully captured):

#BrockTurner is the literal, walking, breathing, definition of #WhitePrivilege.

THIS SHIT HAS TO F***ING STOP!! MAKE THIS GO VIRAL AND HELP THAT MAN GET JUSTICE! #PoliceBrutality #BlackLivesMatter

There's absolutely no honor in using brute force on the poor kid! ?? we #blackpower WILL RISE STRONGER THEN EVER #blm

Trump supporters try to stop a lady from showing the sign no racism no hate. Smfh
#NeverTrump #NoRacismNoHate

Horrific details on death of #ElliottWilliams, who was tortured by Tusla Jail Police #BTP

This is the Most disturbing, heartbreaking but necessary situation to watch. #RIPAltonSterling

This shit makes me sick to my stomach..why children? Wtf
#F***ThePolice

Trump’s even doing that bullshit fake smile white people do when they cross paths with poc. #NotMyPresident

The NBC database also details activity from the account @blackmattersus, which engaged in more toned-down support for a broad range of left-wing activist causes:

#NoDAPL protesters were pepper-sprayed, maced while protecting the burial grounds of indigenous women police were d…

Students at #Dillard got pepper sprayed for protesting David Duke coming there. It's a historically black college a…

“Don’t make me call Donald Trump and get you sent back to Africa,” , John Sousa tells African-American students.

Mood of all black people right now, who get assaulted every day

#MichaelMoore says white people have a responsibility to reject #racism and he's so accurate.

A research has highlighted the suspicion of many that the Electoral College has traces of Black slavery.

@trayneshacole was another alleged Russian troll account that frequently praised Black Lives Matter. An archived shot of the account's bio description gives a taste of its typical content:

He didn’t want a black nurse to help his dying child. And now his child is gone. Pathetic and ridiculous.…

Dear white people: You do NOT have the authority to dictate our reactions to the racism we see and experience. #Kaepernick

Your vote was a hate crime!
#NotMyPresident

An easy guide how to reveal a privileged person
#racism #WhitePrivilege

Black voter told “nigger get out!” in altercation outside a Michigan polling place
#ElectionNight #BlackLivesMatter

President Obama’s #DNC speech was one for the history books and it's really worth reading!
#BlackHistory #justicenow

Stop white people. They have privelege in America.
But black people have talent and power. This is more important.

Given the intense media focus over the past several months on allegations that pro-Trump Russian troll accounts helped to "hack" the 2016 election, it's worth keeping in mind that a significant portion of this Russian effort incorporated the promotion of liberal and progressive causes that simply cannot be reasonably interpreted as being part of a campaign to support Trump.