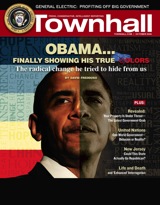 We knew he was a radical leftist. We tried to warn the rest of the country, but the cult of personality blinded millions of Americans. But now he’s showing his true colors.And today, now that the Obama agenda is being implemented, we’re seeing a serious case of buyer’s remorse sweep the nation.In the October issue of Townhall magazine, we juxtapose the image of Obama that was sold to the public and the radical change he tried to hide from us. Not only does this issue expose the two faces of Obama, but it also exposes the close ties and cozy relationship the White House has with GE.We also explain why National Heritage Areas are the latest threats to property rights, detail the United Nation’s decades of failure, and take a look at a conservative Republican who just might give the Right hope—and he’s in New Jersey. Plus, order today and get a FREE copy of Glenn Beck's new book “Arguing With Idiots.”
*** 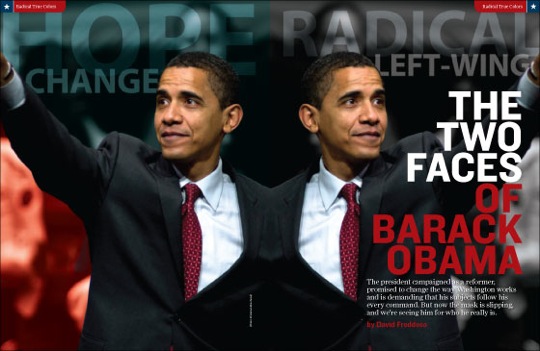 In “The Two Faces of Barack Obama,” author and reporter David Freddoso lifts the mask from the face of Obama to show who he really is. WARNING: It’s ugly—the president is not the reformer he campaigned as and his change for Washington is not what he promised. From the report:

This foundational lie perhaps makes less surprising Obama’s many subsequent empty campaign promises—most importantly, the empty promise that he was someone completely different. Obama is not, nor was he ever, the conciliatory, post-partisan figure he played on television during the presidential campaign.The real Obama has proven to be a knee-jerk partisan, eager to exploit an economic crisis in order to advance a far-left, big-government agenda. He wants the opposition to “get out of the way.” The real man has not brought Americans together as he promised but has rather polarized the country more than ever. The real Barack Obama goes out of his way to make an example of his critics in public office. He even stoops to condescension and demonization against ordinary Americans who object to his proposals.The real Barack Obama is the one who has reneged on promises that probably won him the 2008 election—for example, that he would not raise taxes on five-figure earners; that Americans could keep the health care they have under his grand plan; that science would no longer be subordinate to ideology in decision-making.Since that time, the president has raised taxes on smokers of all incomes, putting the lie to his unequivocal promise: “I can make a firm pledge. Under my plan, no family making less than $250,000 a year will see any form of tax increase. Not your income tax, not your payroll tax, not your capital gains taxes, not any of your taxes.” His climate change bill, still making its way through Congress, would lay another tax on every American who uses electricity. 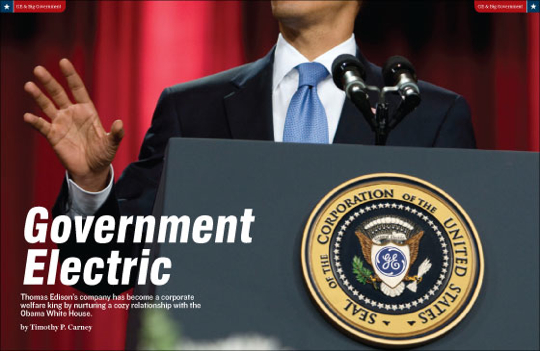 A handful of Obama policy proposals correspond to GE business initiatives. …Lest anyone think these overlaps are coincidences, it’s worth noting the extraordinary access GE has to the White House. Obama tapped GE CEO Jeff Immelt to sit on his Economic Recovery Advisory Board.BusinessWeek reported in July that “White House economic adviser Austan Goolsbee … talks to GE’s Immelt every week on issues such as infrastructure and making the stimulus more effective.” And that fellow West Wingers “[Valerie] Jarrett and Chief of Staff Rahm Emanuel have begun holding ‘off-campus’ dinners with executives such as Immelt. In May, Obama hired Ignacia Moreno as assistant attorney general for the environment. Moreno’s former job was as environmental counsel for GE.It hardly sounds like Obama is freezing out the special interests.All this coziness between GE and government—specifi cally between GE and the Obama administration—is made that much more intriguing by the fact that GE is one of the world’s leading media companies and that its cable news network, MSNBC, was a blatant booster for Obama during the campaign and has retained much of that boosterism since Obama entered the White House. 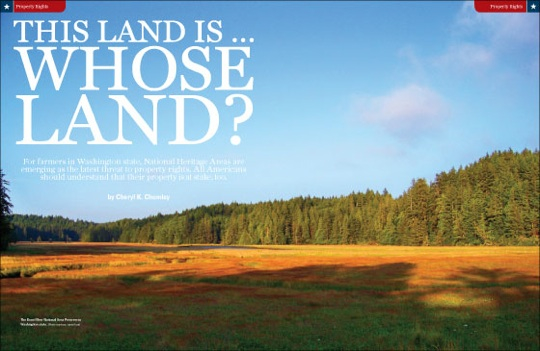 “This Land Is … Whose Land?”, a special report from Cheryl Chumley, reveals that for farmers in Washington state, National Heritage Areas are emerging as the latest threat to property rights. All Americans should understand that their property is at stake, too.
*** 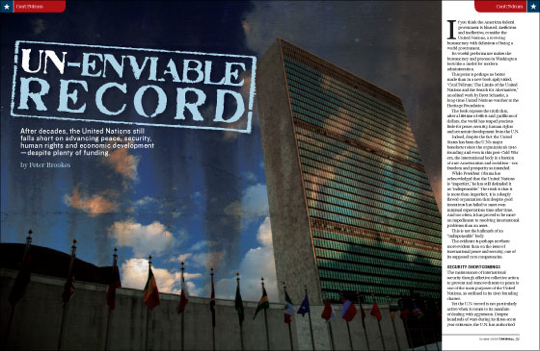 Frequent Townhall magazine contributor Peter Brookes, in “UN-enviable Record,” writes that after decades, the United Nations still falls short on advancing peace, security, human rights and economic development—despite plenty of funding. If you think the American federal government is bloated, inefficient and ineffective, consider the UN, a towering bureaucracy with delusions of being a world government.
*** 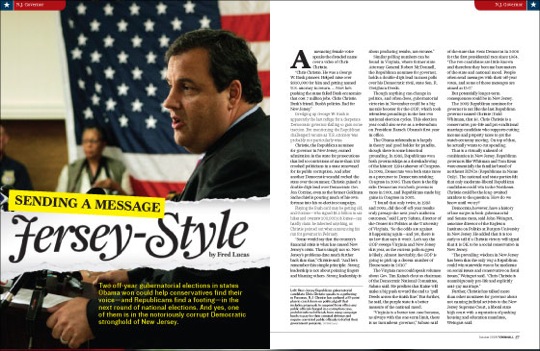 Two off-year gubernatorial elections in states Obama won could help conservatives find their voice—and Republicans find a footing—in the next round of national elections. Fred Lucas reports that one of them is in the notoriously corrupt Democratic stronghold of New Jersey. From “Sending a Message, Jersey-Style”:

The 2009 Republican nominee for governor is not like the last Republican governor named Christie (Todd Whitman, that is). Chris Christie is a conservative, pro-life and pro-traditional marriage candidate who supports cutting income and property taxes to get the state’s economy moving. On top of that, he actually wants to cut spending.That is a virtually unheard of combination in New Jersey. Republican governors like Whitman and Tom Kean were essentially the familiar breed of northeast RINOs (Republicans in Name Only). The national and state parties felt that only moderate-liberal Republican candidates could win in the Northeast. Christie could be the long-awaited antidote to the question: How do we know until we try?

***
Also in the October issue:

*Two filmmakers take on Al Gore and the green movement*Shooting bad guys*Seattle greens vs. the environment*Doctors cutting off limbs willy-nilly*Q&A with British MEP Daniel Hannan*Mary Katharine Ham on Obama’s love of his own voice*Celebrating 70 years of Morton Blackwell*Homeland Insecurity: What does the government plan for our borders?*Life and death and enhanced interrogation. . . And much more.