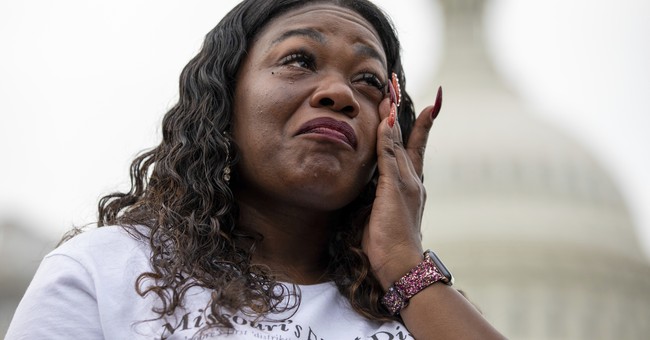 Rep. Cori Bush (D-MO), the mastermind behind progressives’ eviction moratorium rally at the United States Capitol several weeks ago, has landed a book deal worth up to $100,000, Fox News reported on Tuesday.

According to Bush’s 2019-2020 financial disclosure statement, the freshman congresswoman will receive between $50,001 and $100,000 from Knopf Doubleday Publishing Group for the book she is writing. The book is titled “Cori Chronicles,” but its subject and release date remain unknown.

Bush’s financial disclosure also showed that she earned more than $32,000 in salary and exactly $12,000 from Rivera Consulting Inc., a research consulting firm.

The House Committee on Ethics, chaired by Rep. Ted Deutch (D-FL) approved Bush’s financial disclosure, noting that it had “reviewed and approved” her book.

The book deal comes weeks after Bush, a staunch advocate for defunding police, was blasted for spending $70,000 on private security measures in the second quarter of 2021. Speaking to CBS on Capitol Hill earlier this month, Bush doubled down on her private security expenditures, telling critics to “suck it up.”

“I’m gonna make sure I have security because I know I have had attempts on my life,” Bush told CBS from Capitol Hill. “So if I end up spending $200,000, if I spend 10 more dollars on it, you know what, I get to be here to do the work. So suck it up.”

Bush’s book deal income also signals a break with her fellow progressives, such as “Squad” member Rep. Alexandria Ocasio-Cortez (D-NY). Ocasio-Cortez has campaigned against members of Congress enriching themselves and growing increasingly out of touch with the American public.

Bush has not publicly acknowledged the book deal, though one may speculate that some of the proceeds will go toward protecting the congresswoman.