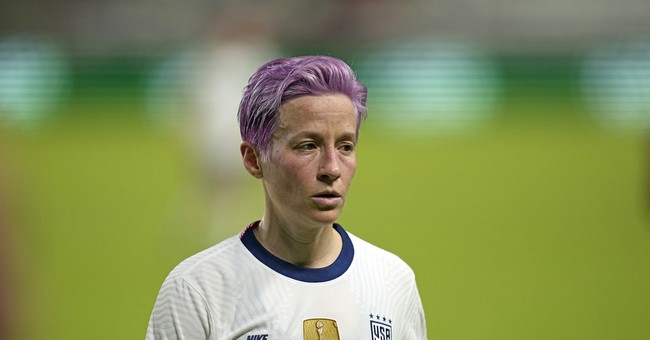 Many Americans online were less than saddened by the loss, as most USWNT players have perpetuated the leftist activist narrative that America is less than exceptional by kneeling during the playing of the national anthem.

Instead of holding America up to the world as a shining example of equality & opportunity for women around the world, they tore us down. Many American sports fans will never forget this. The result? I’ve never seen a team squander more love & goodwill in my life as a sports fan.

As a patriotic American and a combat veteran, I couldn’t be happier that the @USWNT lost to the @CanadaSoccerEN Women. O @Canada!

Best news to wake up too. Nothing but a group of spoiled, disrespectful, woke brats. America is glad you lost. You do not represent us.

The match was held at Japan’s Ibaraki Kashima Stadium at 5 p.m. Japan Standard Time (JST), and was broadcast to American audiences during the early hours of Monday morning. It was decided by Canadian midfielder Jessie Fleming, who scored the lone goal on a penalty kick during the 75th minute.

Fleming’s goal gave the USWNT its second loss of the 2020 Olympics. The team was previously defeated 3-0 by Sweden on July 21. All 11 starters kneeled during the national anthem before that game as well, sparking backlash from former President Donald Trump, who blamed the loss on “wokeism.”

Trump: Wokeism makes you lose, ruins your mind, and ruins you as a person. You become warped. You become demented. The US Women’s Soccer team is a good example of what’s going on… pic.twitter.com/SSPdgp8unu

“The U.S. women’s soccer team is a good example of what’s going on,” Trump said at a rally in Phoenix on July 24. “Earlier this week, they unexpectedly lost to Sweden 3-0, and Americans were happy about it.”

Plenty of online taunts were directed at forward-turned-Victoria’s Secret model Megan Rapinoe, whose progressive activism has made her a polarizing figure among soccer fans.

I do love it when Megan Rapinoe loses because even though she’s ON Team America, she’s not FOR Team America ???? https://t.co/SVBR2JxkqF

Wow. The women's soccer team really blew it AGAIN. Losing to Canada ? Probably SORE KNEES from all their KNEELING. I love it when America wins the Gold---but the "bronze" lining here is we won't see as much of the purple hair chick MEG @mPinoe during the "off season" pic.twitter.com/DNJdnFMxMl

Rapinoe was visibly disappointed after the loss to Canada, vowing to play her hardest in the bronze medal match.

“It’s not the color we want, but there’s still a medal on the line,” Rapinoe said.

"There's still a medal on the line" - @mPinoe

Say it with us: ALL MEDALS ARE GOOD MEDALS ?? ?? ??#TokyoOlympics pic.twitter.com/fHEFm9xYaw

After leading the USWNT to a championship in the 2019 Women’s World Cup, Rapinoe spearheaded a gender discrimination lawsuit against the U.S. Soccer Federation (USSF) alleging that the women were not compensated fairly for their success.

In accordance with the Equal Pay Act of 1963, Rapinoe and her teammates are seeking $66 million in damages from the USSF. The case remains ongoing, and the USWNT filed an appeal on July 23.

Canada and Sweden, which both secured 1-0 victories in the semifinal round, will face off in the Tokyo Olympics’ gold medal match. The Americans must settle for a chance at bronze against Australia on Thursday, Aug. 5 at 5 p.m. JST (4 a.m. ET).

The USWNT holds a 26-0-4 all-time record against Australia, but the Australians did play the U.S. to a scoreless tie on Tuesday, July 27.