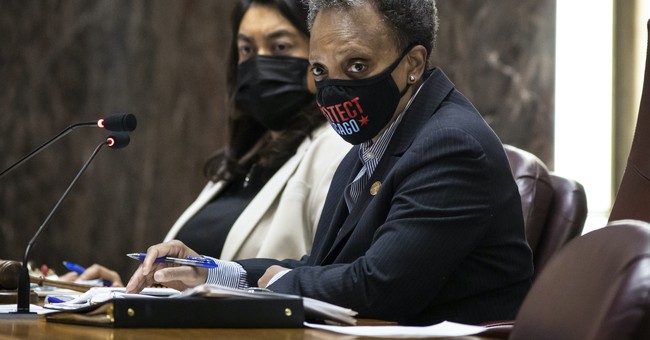 Chicago Mayor Lori Lightfoot (D) continues to defend her racist policy with reporters. Speaking to “Sway” host Kara Swisher in an interview published in The New York Times on Monday, Lightfoot explained her outrageous decision to only accept interviews from non-White journalists.

This is exactly why I'm being intentional about prioritizing media requests from POC reporters on the occasion of the two-year anniversary of my inauguration as mayor of this great city.

“I would absolutely do it again,” Lightfoot told Swisher, who is, ironically, a White journalist. “I’m unapologetic about it because it spurred a very important conversation, a conversation that needed to happen, that should have happened a long time ago.”

“I’m a Black woman mayor. I’m the mayor of the third-largest city in the country. Obviously I have a platform, and it’s important to me to advocate on things that I believe are important…The media is in a time of incredible upheaval and disruption, but our city hall press corps looks like it’s 1950 or 1970.”

The only thing that looks like it is 1950 is the racial segregation that Lightfoot is enforcing within her city hall press corps. Actually, in 1950, Lightfoot’s office would have been occupied by a White person banning the Black city hall reporters. There’s a good reason that no serious politician has advocated for this power structure in decades.

If this whole charade was truly about “sparking a conversation” about racism, Lightfoot would have addressed the lawlessness that plagued Chicago during last summer’s riots. Instead of fueling divisions by turning a blind eye to the violence, she would have supported its true victims, Black business owners like Terrence Moses.

Terrance Moses, says these are black owned businesses and the destruction from these protestors doesn’t support Black Lives Matter pic.twitter.com/QkOH1FoAxD

She also would not have demonized President Donald Trump for offering to send in the National Guard to restore order. And Lightfoot might have thought better of giving him the middle finger before floating around the idea of welcoming President Joe Biden’s troops into Chicago to control its massive crime spike — a task clearly above her own pay grade.

Lightfoot’s wokeness is paid for by the dozens of young Black men gunned down by gangs across Chicago each year. As Presidents Trump, Biden, and nearly all members of their respective parties fight this toxic, old-school racism, it’s time that the mayor of America’s third-largest city follow suit.