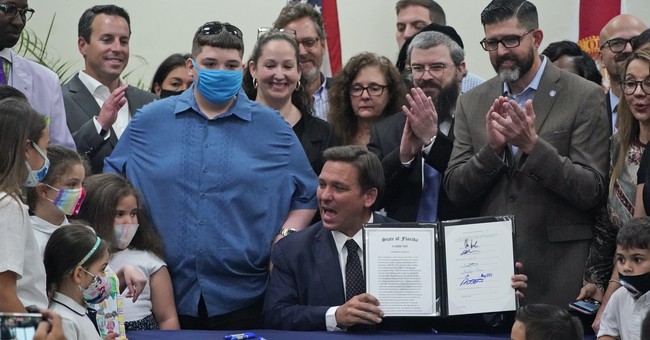 On Tuesday morning, Florida Gov. Ron DeSantis (R) signed the Fairness in Women’s Sports Act (FWSA) into law. Intended to do exactly as its name suggests, the FWSA establishes that “Athletic teams or sports designated for females, women, or girls may not be open to students of the male sex.” It goes into effect on July 1.

When signing the FWSA, DeSantis said that Florida needs to “protect our girls.” Various studies — including the December 2020 study published in the British Journal of Sports Medicine — have backed up his attitude. Even with reduced testosterone levels, transgender women enjoy significant advantages over biological women in height, strength, and coordination. Synthetic hormone alterations do not and cannot compensate for such naturally-occurring differences.

DeSantis also expressed hope that Florida’s new law can take a stand against powerful athletics organizations like the NCAA, which moved its March Madness basketball tournament out of North Carolina in 2017. The reason? Well, the Tar Heel state had passed a controversial “bathroom bill” requiring citizens to use public restrooms that corresponded with their biological sex.

BREAKING: On the first day of #Pride, Florida Governor Ron DeSantis has signed into law a bill banning trans kids in the state from playing sports.

We will be filing a lawsuit to block this arbitrary, discriminatory ban. #LetKidsPlay

An ABC News headline also pointed out that DeSantis signed the bill on the first day of Pride Month, which is celebrated annually throughout June by LGBTQ citizens and their allies. And critics took to Twitter to express their frustrations with what they perceived as hate:

If it's really about fairness of sports, ask Desantis why he isn't banning tall cis people from basketball, or cis women with a more masculine anatomy, surely they have unfair advantages too, right? Where are those bans? It's clear it's not about protection, it's about hate.

Whether you support the FWSA or rant against it online, there is no denying that its passage is another step in DeSantis’ long line of pushing popular conservative legislation to elevate his national platform. On May 3, the Florida governor suspended all local mask mandates across his state. And just last week, he signed the country’s first “deplatforming” bill to penalize social media companies for censoring the posts of politicians. With President Donald Trump’s dismissal from Twitter still fresh in the minds of many conservatives, DeSantis seems to be taking the lead in challenging Big Tech tyranny.

But of course, no matter how effective DeSantis has been as a governor, he has to win re-election next year if he wants any shot at the White House in 2024. Nikki Fried, who has served as Florida’s Agricultural Commissioner since January 2019 and is currently the only Democrat elected statewide, has announced her candidacy for governor in 2022. In her initial campaign announcement, Fried declared, “After two decades of Republican governors it’s time to try something new.”

Unfortunately for Fried, this message is not going to resonate with many Floridians. The Republican leadership of Ron DeSantis has allowed the Sunshine State to remain a shining beacon of freedom throughout the COVID-19 pandemic. Despite Florida having the second-oldest population of any state in the country, its COVID death per capita rate falls in the middle of the pack.

DeSantis’ leadership and strong standing in the polls — a February 2021 U.S. Term Limits poll showed his 64 percent approval rating among Floridians — assures that no Republican should challenge him. A challenge from Nikki Fried does not come completely out of left field, but the idea that Fried could pose any threat to DeSantis is laughable. DeSantis himself seems to know this, as he responded to Fried’s campaign announcement simply by stating that she has done “nothing” during her time in office.

By signing the Fairness Women’s Sports Act, DeSantis should see his popularity further explode among conservatives. Still, DeSantis’ national ambitions depend on his ability to push through popular legislation and keep up his perception as a viable post-Trump GOP leader.