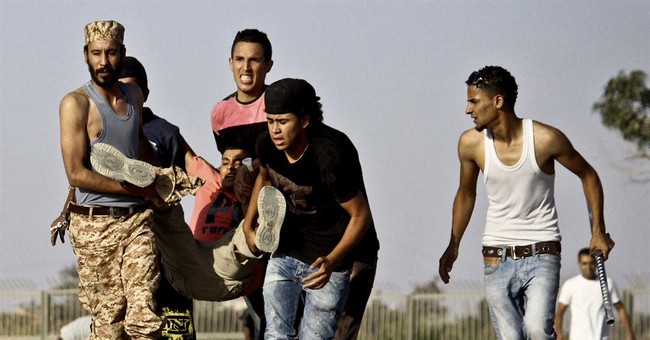 Then, after Gaddafi was finally overthrown, the President irritated our allies by claiming credit for it during the presidential campaign -- a claim that even Richard Cohen of the Washington Post excoriated for its deceit (remember, this is when the whole "leading from behind" meme got started).

Now, Libya is in the throes of an ugly crisis, with its people at the mercy of extra-legal militias.  It need hardly be pointed out that it's a fertile breeding ground for Islamofascist terrorists -- indeed, just last month, the US indicted a Libyan militia leader in the Benghazi embassy attack that killed four brave Americans.

As the President once again "leads from behind," punting responsibility to Congress for Syria, it's worth noting that his claims that one can come in, remove a leader and then just leave are highly suspect.

As Congress debates whether to authorize Syrian attacks, part of their job is to acknowledge the tough realities: That in this day and age, it's difficult to run a successful foreign policy laboring under the delusion that we can predict, control and limit the consequences of our actions well enough to be able to preemptively define the limits of our commitments when we undertake military action.