Man Who Allegedly Ran Off with Pelosi's Lectern Arrested in Florida 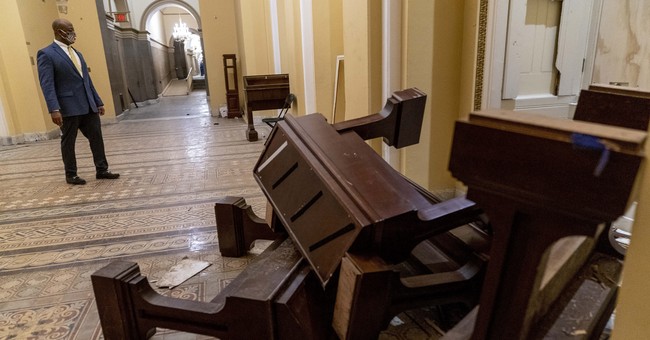 Police have arrested a man accused of taking House Speaker Nancy Pelosi's lectern during the riot at the U.S. Capitol on Wednesday.

Florida resident Adam Johnson, 36, was booked into the Pinellas County jail on Friday night on "one charge of knowingly entering or remaining in any restricted building or grounds without lawful authority; one count of theft of government property; and one count of violent entry and disorderly conduct on Capitol grounds," the United State's Attorney's Office announced in a news release.

"It is alleged that on Jan. 6, 2021, Johnson illegally entered the United States Capitol and removed the Speaker of the House’s lectern from where it had been stored on the House side of the Capitol building," the news release stated. "A search of open sources led law enforcement to Johnson, who is allegedly seen in a widely circulated photo inside the Capitol carrying the lectern."

ABC News reported the lectern seen in the viral photograph being carried away by a man during the riot was located "by a member of the Senate staff in the Red corridor of the Senate wing off the Rotunda in the Capitol building," according to the arrest warrant. TMZ reported there was no damage to either Pelosi's lectern or the speaker's gavel and both items have been recovered. According to the arrest warrant, the speaker's lectern carries a market value of more than $1,000.

Police also arrested an Arkansas man this week who allegedly broke into Nancy Pelosi's office and appeared in another viral photograph showing a man seated behind Pelosi's desk.

Additional arrests have been made and the cases are being prosecuted by the U.S. Attorney’s Office for the District of Columbia and investigated by both the United States Capitol Police and the FBI’s Washington Field Office.