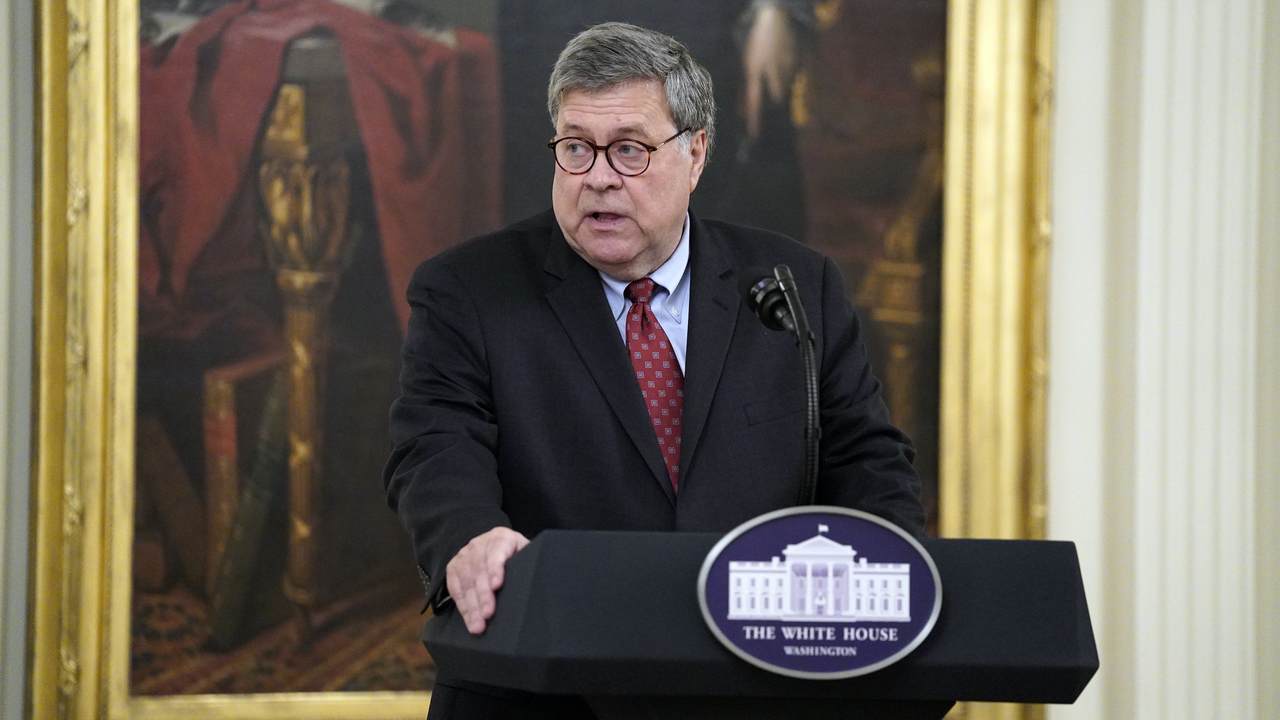 "Even in the best of times, there is no more challenging profession," Barr told law enforcement leaders from around the country. "It requires skill, courage and the patience of Job. But the climate today has made the job 10 times more difficult than it has to be."

Barr said the current political climate is one where lawmakers sometimes throw the police to the dogs and where the national media cultivates a false narrative around a few isolated incidents to castigate the police as systemically racist and evil.

"That countenance is slowly veneering that all police are bastards or cops are bastards, or that they should be thrown and fried in a pan like bacon," Barr said. "These are the men and women who put their lives on the line to serve their communities to protect people they do not know at great risk to themselves. And yet, this is perfectly countenanced in our society by the media."

The attorney general saluted the men and women of law enforcement for standing tall in these troubling times and carrying out their sworn duty to protect the public.

After detailing the period of the 1970s and 1980s, where the policies of law and order precipitated an era of falling crime rates, the attorney general warned that many states are now taking the low crime rates for granted and returning to the "misbegotten policies" that led to the high crime rates in the first place.

"It is said, that you cannot address crime by going after the criminals, but you have to address the 'root causes' of crime – which means more social spending," said Barr. "The defund the police movement reflects this philosophy – take funding from police and put it more into social programs. ... A strong police presence and a strong law enforcement response to violent crime in our cities are the 'table stakes.'  Without these, any idea of social progress or addressing the root causes of crime are folly."

On the subject of police reform, the attorney general called for greater investment in police and public safety.

"In most cases, most of you know in your own communities the drivers of violent crime," said Barr. "It’s worth an investment to save those lives, to save those innocent lives, and to save the property costs, and the blighted lives that crime brings with it. And so we have to wake up and once again reprioritize law enforcement."

"Finally, if we are interested in real reform," Barr continued, "we have to distinguish between people of goodwill who have grievances and want to protest them but at the end of the day are genuinely interested in improving policing and bringing about safer and fairer society. And we have to distinguish those people from those whose professed agenda is to tear down, to destroy the existing system. The goal of these instigators, these violent instigators, is to precipitate violence with police and to ultimately demoralize the police. These are the radicals who have hijacked legitimate, first amendment demonstrations and engaged in violence including Molotov cocktails and brick throwing, sometimes shooting."

The attorney general's full comments can be read here.