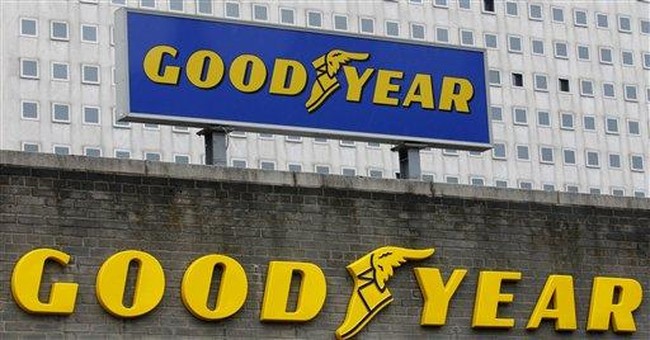 President Trump encouraged his supporters to boycott the Goodyear Tire & Rubber Company on Wednesday after it was revealed that employees for the company were instructed not to wear MAGA hats or show support for the law enforcement community through the Blue Lives Matter movement. Employees were encouraged however to show support for the far-left Black Lives Matter movement and the LGBT community.

WIBW in Kansas reported that a slide show at a diversity training program for Goodyear employees says it's "unacceptable" for employees to wear MAGA attire and support the Blue Lives Matter Movement but "acceptable" to support the LGBT movement and Black Lives Matter. The photo from the slide was widely circulated on Twitter and came to the attention of President Trump.

While President Trump acknowledged boycotts are in vogue on the radical left, the president encouraged his supporters to take a page from the Left's playbook and boycott Goodyear over their discriminatory policy.

Don’t buy GOODYEAR TIRES - They announced a BAN ON MAGA HATS. Get better tires for far less! (This is what the Radical Left Democrats do. Two can play the same game, and we have to start playing it now!).

Following widespread outrage, Goodyear issued a statement, defending its policies that prohibit employees from supporting political candidates or advocating for causes "that fall outside the scope of racial justice and equity issues." White House Press Secretary Kayleigh McEnany told reporters that the company's statement did not clarify its seemingly discriminatory policy, noting that blue lives matters should be considered an equity issue.

Yesterday, Goodyear became the focus of a conversation that created some misconceptions about our policies and our company. Goodyear has always wholeheartedly supported both equality and law enforcement and will continue to do so. pic.twitter.com/oO6jUg2rTR

Asked about Goodyear at a press conference on Wednesday, President Trump said he'll leave the details of the proposed boycott up to the American people, but did say that he's open to the idea of finding a new tire company for federal contracts. Goodyear provides tires for government vehicles like the presidential limousine, the "Beast."